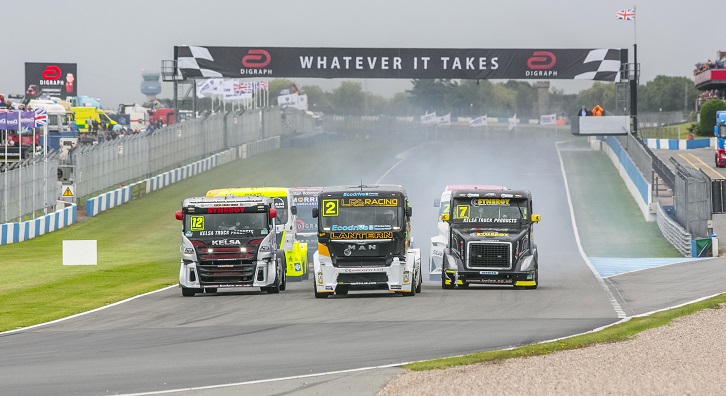 The British Truck Racing Association Championship will now be brought to followers of high-speed HGV motorsport in association with the best-selling truck magazine in the UK – Truck & Driver – following the agreement of a partnership between T&D publisher DVV Media International (DVV) and the British Automobile Racing Club (BARC).

Following two early rounds the championship is about to hit top gear with racing meetings at Germany’s famous Nurburgring (30 June to 1 July) followed by ‘the fastest circuit in the UK’ at Thruxton in Hampshire (7 July to 8 July) and the ultimate festival of all things trucks and trucking – Truck & Driver’s Convoy in the Park – which takes place at Donington Park on 21 and 22 July.

Championship director Glen Horncastle said: “It is fantastic news that the Championship will be working with such a long standing publishing group as DVV, and knowing how much support and exposure Truck & Driver will bring through its editorial and social media channels is exciting for all concerned.”

DVV sales director Vic Bunby said: “We’re delighted to be entering this partnership, especially as we build towards the festivities at Convoy in the Park. This is a unique opportunity to bring truck racing and truck racing sponsors to a wider audience who love their trucks.”

DVV will also be responsible for sponsorship sales for the championship and has a variety of packages to get the best results for your brand.

Truck & Driver, Truckanddriver.co.uk and its sister publication Commercial Motor will bring you all the action, as well as taking you behind the scenes with interviews and profiles of the drivers, teams, trucks and circuits – bringing the British Truck Racing Association Championship to life.

You can also follow all the action on Twitter @TrucknDriver and the Truck and Driver homepage on Facebook – and the stars of DVV’s You Tube phenomenon A Week in Trucks will be filming at both Thruxton and Convoy in the Park to bring you their unique take on the truck racing experience.

The race season continues to Snetterton, Norfolk, on 8 and 9 September, Pembrey in West Wales on 13 and 14 October before culminating at the Bonfire Night extravaganza at Brands Hatch in Kent on 3 and 4 November. You’ll also be able to pick up copies of Truck & Driver in the paddock areas at all race meets.