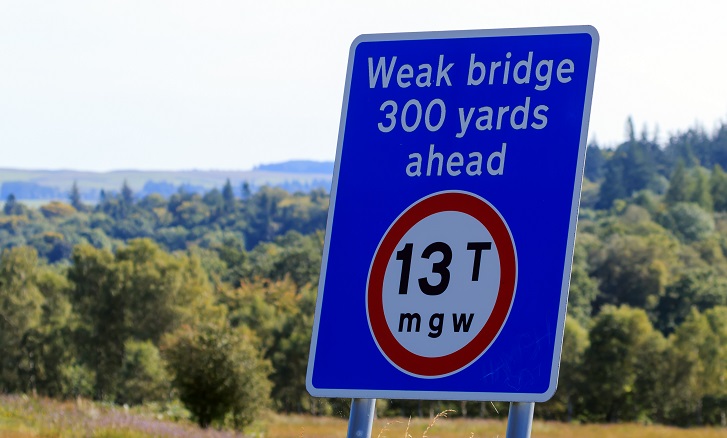 Nearly 3500 council maintained road bridges in Britain are substandard and not fit to carry the heaviest vehicles – trucks of up to 44 tonnes – yet many will not be repaired, according to new figures.

Analysis of date by the RAC Foundation for the 2016-17 financial year – received from 204 of the 207 local highway authorities in England, Scotland and Wales – found that 3,441 structures over 1.5m in span are not up to standard.

This is a rise on the 3203 identified in the previous year and represents about 4.6% of the circa 74,000 bridges in the road network.

Many of these bridges have had weight restrictions imposed. Others are under programmes of increased monitoring or even managed decline.

However, budget restrictions mean councils only anticipate 370 of these will have the necessary work carried out on them within the next five years.

The one-off cost of bringing all the substandard bridges back up to perfect condition would be about £934 million – equivalent to £271,000 per structure.

The total cost of clearing the backlog of work on all bridges – including those that are substandard – is estimated at £5 billion, up sharply (28%) on the estimate of £3.9 billion a year earlier.

At the same time, the estimated amount of money councils are spending annually on maintaining their entire bridge stock is £367 million – down on the £447 million spent in the previous year.

The survey of local highways authorities was carried out with the help of the National Bridges Group of ADEPT (the Association of Directors of Environment, Economics, Planning and Transportation).

Steve Gooding, director of the RAC Foundation, said it was “unwelcome, if unsurprising” news that the number of substandard bridges has risen.

“The road maintenance crisis faced by financially-beleaguered councils is often reported in terms of potholes to be filled but this research hints at the wide spectrum of things needing attention, including blocked gulleys, overgrown verges and, of course, fragile bridges,” he added.

“The really worrying thing about this data is that the costs and affordability of fixing the problems are moving in opposite directions – while the estimated cost of clearing the bridge maintenance backlog has risen by 30%, an increase of a billion pounds, the amount councils are spending to maintain the total bridge stock has fallen by 18% year-on-year, from £447 million to £367 million.

“As council budgets continue to be squeezed by the growing pressure of social care these numbers are a stark illustration of the gloomy consequences for the quality and integrity of our local networks.”

Graham Cole, deputy chairman of the ADEPT National Bridges Group, added: “The increase in the headline number of reported substandard bridges is probably due to the use of more accurate data. Councils continue to effectively manage their bridges, including substandard bridges, in accordance with national guidelines to maintain the safety of the public.

“However, this increasing number does create a pressure on budgets and an increase in funding would help to reduce this problem and maintain the availability of the highway, where appropriate.”