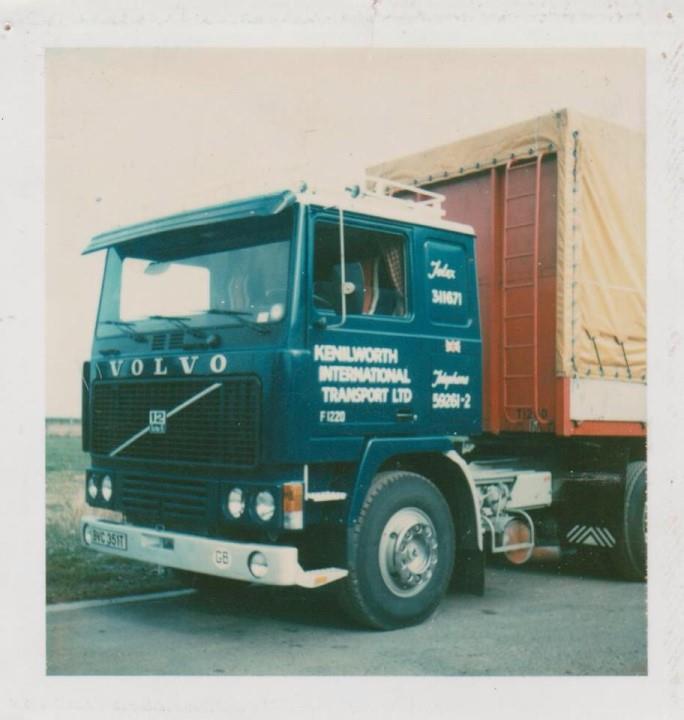 I went to a school reunion last Saturday, says Biglorryblogs mate, the editor of T&D, meeting with my old classmates that left Kenilworth secondary school aged 16 in 1985, with varying numbers of O-levels. It was the first time I’d seen some of these old classmates for 30 years or so, and I have to say I was looking forward to it! As I was returning to Kenilworth, I made sure I headed over early to allow myself plenty of time to have a look round those old haunts that had been a big part of my childhood.

During this trip down memory lane, I went passed the yard of Kenilworth International Transport, a small haulier that did Europe and the Middle East runs in the late 1970s. I went to school with owner Peter Jackson’s son, David, and when the trucks were in the yard as ten year olds we’d spend a hour or two playing in them. To this day, I still remember the classic brown velour interior of a Volvo F12, with that tray next to the dash which was tailor made for stashing a good selection of cassette tapes to while away the hours of a long haul.

KIT ceased operating many, many years ago, but would Peter still live there? I decided to bang on the door and find out, I mean, what was the worst that could happen? He’d not be there or any new owner might simply tell me to “get ooorf my land!” So with just a mild hint of trepidation, I banged on the door and when the old lady answered, I told her what I was looking for – the owner of KIT. To my delight, not only did Peter still live there but he was alive and well, but it walking the dog! But I was invited in and soon flicking through a mass of picture albums featuring of KIT’s F89s and F12s at work on the ME runs.

Anyway, after a while chatting, Peter has agreed to be interviewed for T&D and I’ll be heading back to Kenilworth to see him in the middle of March – this time without a school reunion!

And just a mention about the reunion… “Do you still like lorries?” was a common question asked of my by my old school friends… I took great delight in telling them that I now edited the UK’s best truck magazine!

And finally, as I drove home, I was delighted to see a Volvo F12 on the road – a drawbar loaded to the brim with bales of straw. How 1985 is that?