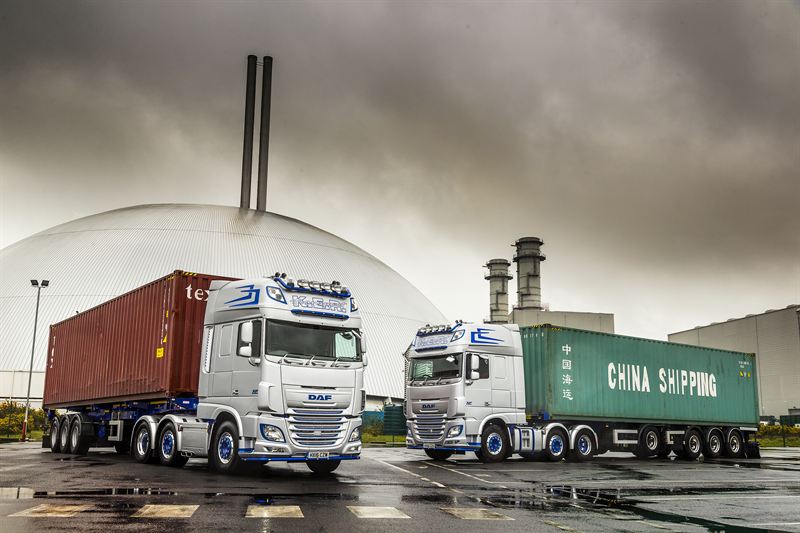 The seven vehicle fleet of KER Transport, operating out of Marchwood near Southampton, has taken two new Euro 6 DAF XF 510 FTG tractors onto its fleet as part of an on-going renewal programme. The new DAFs now bring to six the marque’s representation in the fleet.

Ken Reed, the owner of the business said, “We have had terrific service and support from Adams Morey and that has led directly to the current fleet’s balance. We have bought low-mileage, used DAFs from them in the past, which have proved very reliable and fuel-efficient, and the dealer has always looked after us very well – including getting those used trucks properly liveried up for us as part of the deal.” The new 6×2 XFs have been acquired on outright purchase plans,.Ken Reed noted, “We were very happy with the way Paccar Finance set up the deal for us, including three years of R&M. We tend to go for ownership where we can, rather than leasing or contract hire, because we prefer the control it gives us over the fleet and the renewal programme.” KER Transport is also trialling DAF Telematics, with Reed confident this will be put on the two new XFs shortly, citing the ‘very usable and useful’ information that will suit the largely container work the fleet undertakes. Work that is growing steadily for the operator.

That growth has seen Ken Reed separate the operations of the family firm into two – sales and transport operations. He explains, “KER Transport has been running very successfully for about 15 years, just as a haulage business. We realised that we could grow far more strongly however, if we had a dedicated sales and management business, so I set up Ken Reed & Sons a couple of years ago. That operation deals with the container shippers, shipping companies, ports and so on, and KER Transport is now a busy ‘independent’ sub-contractor for that business. It means we can also employ other subbies for Ken Reed & Sons volumes, which allows us to grow the business without the potential constraints of our own fleet size – and that is a win-win for all concerned.”

Reed’s final note on the transition to DAF was centred on the needs of the company’s drivers. “You ignore driver needs at your peril,” he said. “They are the people that have to make theses trucks work, and work profitably for us all. While we had few complaints with our old vehicles, we are actually getting really positive feed-back on all the DAFs, and our two new ones are the icing on the cake for the team.”

Get your hands on a free 3-in-1 emergency beacon by subscribing to Commercial Motor or Truck & Driver   www.commercialmotor.com/freegift    www.truckanddriver.co.uk/freegift