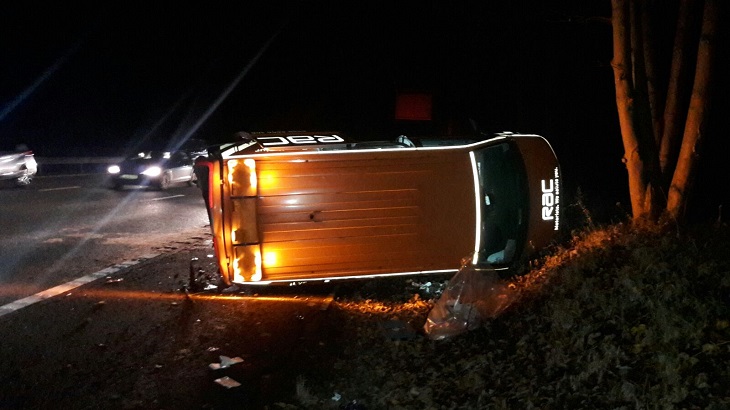 Drivers should reduce their speed and increase the gap between their vehicle and any people on the hard shoulder or emergency refuge area on a smart motorway, the RAC has said.

The RAC is launching a campaign to draw attention to the risk of breaking down on a motorway in response to a serious incident that occurred on 23 November on the westbound hard shoulder of the M4 near Swindon.

In the incident, accident roadside technician Andrew Barrett, an RAC patrol for 14 years, was assisting a motorist whose car had suffered a puncture and was stopped on the hard shoulder near junction 15. He had positioned his patrol van, correctly as trained, with lights and beacons flashing a distance from the member’s vehicle and asked them to stand well back on the grass verge. Barrett was changing the wheel on the off-side of the vehicle when another car travelling at speed collided with his patrol vehicle.

The collision was of such force that it rolled the three-tonne patrol vehicle, pushing it along the hard shoulder. The RAC member is believed to have struck his head and was knocked unconscious as he moved out of the way. The driver of the car which struck the patrol van, although injured, was able to climb out of his vehicle.

Barrett assisted the member on the hard shoulder and alerted the emergency services. The police, fire and ambulance services arrived at the scene swiftly and the westbound M4 was closed for about an hour and a half while and the crews attended and the damaged vehicles were removed, the carriageway cleared and re-opened.

There have been two motorway fatalities this year of roadside operators – one on the M25 and one on the M69. This latest accident illustrates the dangers roadside technicians face when attending motorway breakdowns.

RAC health and safety consultant Steve Robinson said: “The RAC is calling on drivers to ‘slow down, make space and move on’ when passing motorway breakdowns.

“With traffic volumes rising and several recent serious accidents involving roadside assistance patrols and breakdown contractors we need motorists to consider a new approach to how they drive past stricken vehicles, drivers and passengers, and those working in vulnerable locations.”

The RAC has 3 messages for drivers:
• Slow down – take care when passing any vehicle and people on the side of the motorway, reduce your speed and reduce the risk
• Make space – widen the gap between your car and the broken-down vehicle and roadside workers. Use all of your lane by moving over to the right, only change lane if it is safe to do so
• Move on – avoid ‘rubber-necking’, or the temptation stare at someone’s else’s misfortune – it’s a distraction from your focus on the road ahead.

Barrett said: “It was horrific. One minute I was changing the customer’s front wheel the next I heard an almighty crunch and looked up to see my van rolling over towards us and the car spinning into the live lane. It was not an experience I want to repeat and it certainly shows you can never be complacent when attending a motorway breakdown.

“I want to thank all those who assisted from the off-duty nurse who was first on the scene and swiftly joined by two off-duty paramedics and to the fire brigade, police, highways and the ambulance crew who were all brilliant.”

Robinson added that this incident serves to show how dangerous it can be for anyone who has to stop on the hard shoulder of a busy motorway. “We have released these shocking photographs of the RAC patrol van as they clearly demonstrate the need for a new way of thinking when drivers encounter stricken motorists and breakdown operators at the roadside.”