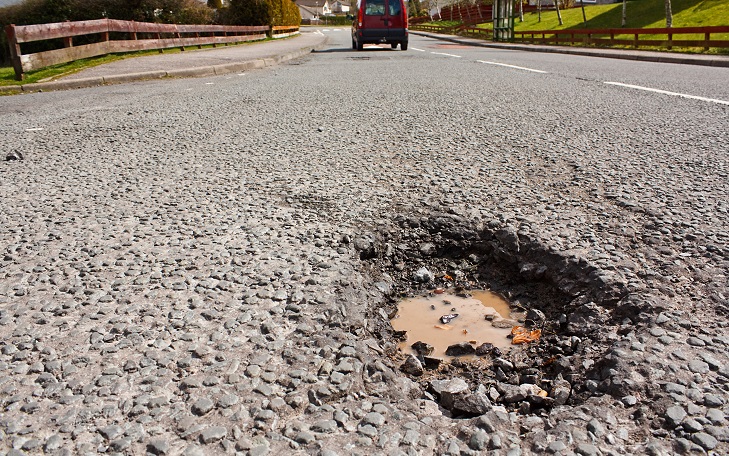 The Road Haulage Association (RHA) has called on the government to provide more investment fro councils to be able to fix potholes, after a report linked them to vehicle breakdowns.

The report, by the RAC, said that patrols attended about 11% more callouts attributed to potholes in the final three months of 2017 than it did the year before – and warned that road surfaces may well deteriorate further by spring due to the wet and cold weather.

The LGA say the government plans to spend £1.1 million per mile to maintain its strategic road network between 2015 and 2020, but will offer just £21,000 per mile for local roads over the same period.

RHA chief executive Richard Burnett noted that while pothole-related breakdowns are bad news for all road users, the cost to road hauliers in particular is considerable.

“Every day many thousands of deliveries are made to, and collected from distribution centres and manufacturers located at out of town trading estates,” he said. “Yet because of financial constraints, these ‘side roads’ are not at the top of council repair lists. Yet the damage caused to HGVs, in particular to their suspension systems, can be considerable.

“These side roads must be included in any plans to improve the strategic road network.”

This news comes days after a report by the RAC Foundation found that nearly 3500 council maintained road bridges in Britain are substandard and not fit to carry the heaviest vehicles – trucks of up to 44 tonnes – and yet many will not be repaired.

“[This] news… clearly demonstrates that funding for road improvement schemes should be more wide-ranging,” added Burnett.

“For years the road network has suffered from under-investment in our towns and cities and we are now facing the consequences. Poorly maintained roads are bad for road users, bad for communities and bad for business.

“We call on the Government to reverse this culture of neglect and do what it takes to improve the roads our economy relies on.”