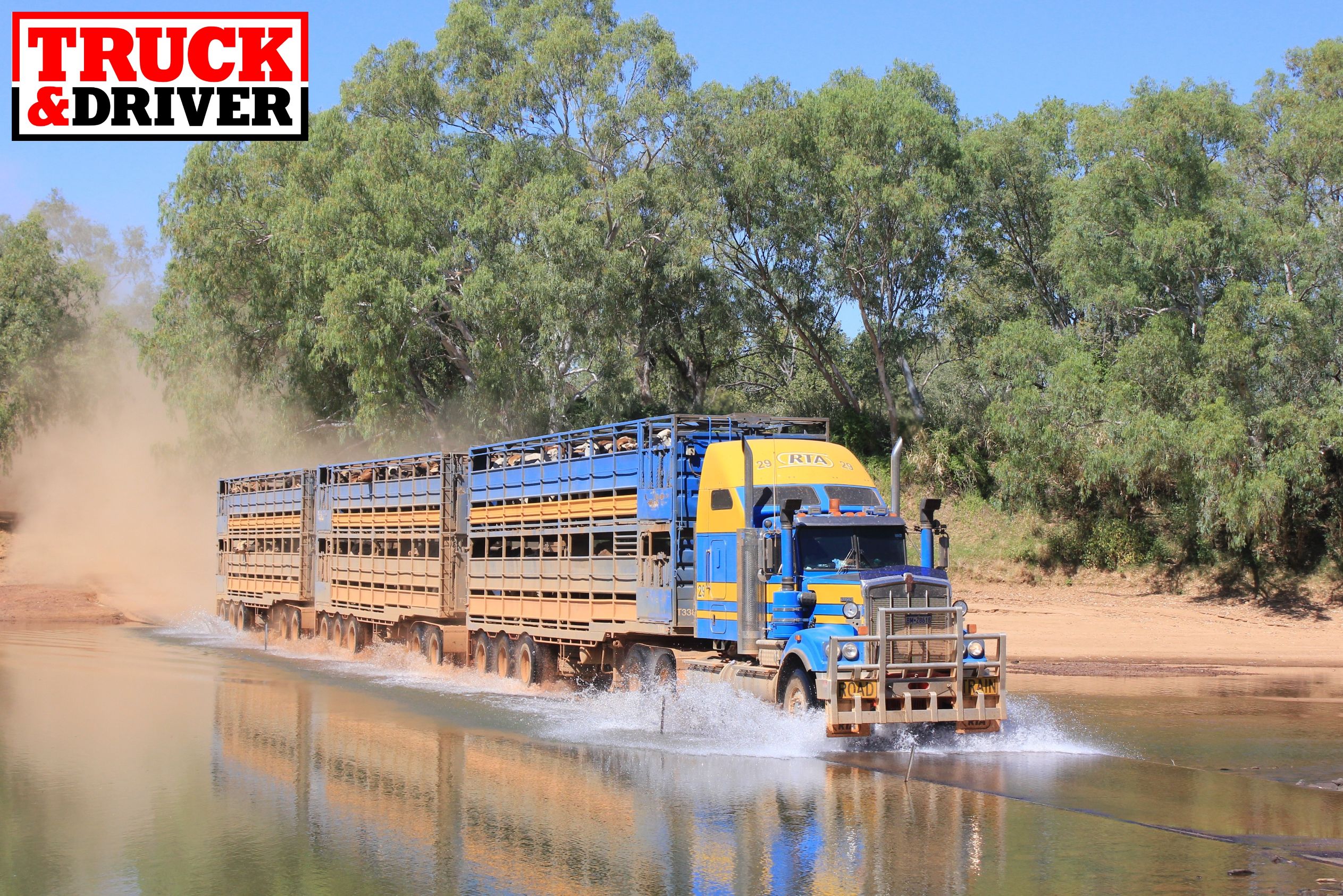 Here’s the first article Paul wrote for us for Team Truck & Driver, as part of the May 2019 “Relaunch” issue. The pictures are so fabulous, and it’s so full of interesting information we thought we’d post it on here for your enjoyment. Scroll to the bottom to see photos.

The reason I’ve begun by churning out a few statistics, is to give you some idea of the size of Australia – it really is vast. In the centre, not much happens as most of the people live on the coast, the east coast in particular.

As a result, there are a lot more trucks over on the east coast, which is a part of the continent I never really go to. So, I’ll being by stating that I have very little knowledge of what goes on over there. But when it comes to Western Australia and the Northern Territory, I’ve spent a fair bit of time on the highways and dirt tracks.

The first question I’m asked is “are there any tachographs in Australia”. The answer is in no, but there are logs books in all states apart from WA and the NT. Whereas in the EU, there is one set of rules (i.e digicards) for all member states, in Australia, not all states have the same laws.

The log book is officially called the “National Drivers Work Diary” and which needs to be filled out throughout the day. From what I’ve heard, states like Victoria are very strict, dishing out big fines for infringements. When based in Darwin, a regular run was over to Cloncurry, Queensland for cattle, requiring a log book. So I’d just begin filling out the book when I cross the border, then forget about it once loaded and back in the Territory. Nice!

I’ve only been inspected once by state transport inspectors, or  “the heavies” as they are known, in Kununurra near the WA/NT border. They are mainly concerned with vehicle maintenance – no mention of driving hours.

Unlike Ireland, the trucks and trailers do not have to be tested every year. It all sounds a bit casual which is sort of true, although not entirely. The system here is self governance; maintain your gear correctly, keep records to prove it and you’ll be left alone. The thing to realise is that in such a sparsely populated area, there is not the same need for the  over-zealous approach adopted in Europe.

Surely it’s open to abuse? Possibly. In the old days especially, drivers were known to take drugs to cover the vast distances. You’d still meet an occasional guy on amphetamines – they are easy to spot; the jaw action is the first sign, constantly fidgeting, wrists going all over the place etc.   Guys who have been doing it for years may have very little teeth left from the constant grinding.

I’ve heard many tales drivers “on the gear”; common themes are staying up all night to polish the truck and random, bizarre behaviour such as removing a spare wheel to wash it in the middle of the night!

The world of cattle transport was especially prone to drug taking. Often, the cattle would be loaded in the evening, then the drivers would go through the night, unload, and then head off for the next job. The thinking was “we’ve got to get the cattle there, we can’t stop”. So when the station workers, the agents and the workers at the feedlots  or export yards were tucked up in bed, the driver was going through the night.

While some lament the old days, some beg to differ. Duncan Thomson, an experienced bush man, ex ringer (cowboy) and station fixed wing pilot explains; “I don’t miss those days at all. Men were tired, cattle were tired, there was no need for it. But everybody did it. Inevitably after going for days without sleep, somebody was bound to go bush”. Going bush means going off the road. It’s an everyday term in Australia, example; I dumped my girlfriend; “I bushed her”.

In the early 2000s Road Trains of Australia brought in the midnight ban; all trucks were to park up at midnight, loaded or empty, until 6am. A lot of the big firms have followed suit. Duncan says it was the best thing that ever happened; “The driver gets a rest and the cattle get a rest. Standing upright, maintaining their balance while the truck is moving takes a lot of energy. Pull up at night and they get a rest. By sun up, they start moving again and are ready to go”.

The best thing about the cattle job is that there are no deadlines. The only instruction you will get is to be somewhere “at daylight”. Within reason you’ll have plenty of time to get there – if you’re lucky you’ll arrive at the station for dinner. Then again, some of the yards are hours away from the homestead, so you always need to be stocked up with your own food and water.

I could go on and on about hauling cattle, but that deserves a standalone article. To bring it back to another question I’m asked is in relation to the licence, how much does it cost etc.The three main categories are HR (heavy rigid), HC (heavy combination) and MC (multi combination). Technically you need to hold a HR licence for one year before you can do your HC licence, which is the equivalent to our artic licence. But, if you are lucky, you can get your Irish or UK licence transferred to a HC, meaning you can do your MC test straight away.

This was how I did it. Having never driven a Roadranger previously, I took a few lessons, mainly to get used to the non-synchromesh gearbox, but also to learn the course. Although the MC test is in a B double, this allows you to drive the biggest road trains in Australia.

Drivers in Australia are paid more than in the UK, but the cost of living is more expensive also. If money is your main concern, then a side tipper job hauling iron ore on a shift basis is one of the better paying ones. You’ll have flights, food and accommodation provided. Personally, the monotony and the amount of health and safety never appealed to me. Hauling cattle is much more adventurous, with no health and safety nonsense. The money isn’t bad once you don’t mind being away. The experience  is the part you can’t put a price on.

Another question I’m asked is about vehicle lengths, which I’ll explain as simply as I can. You can take a  27.5 metre long truck anywhere in Australia. Mostly, this will be a B double, but increasingly we are seeing two equally short trailers with a dolly. This is classified as a Long Vehicle and the only signage needed is a Long Vehicle sign at the rear. The next limit is 36 metres,  permitted in less built up areas.  This requires Road Train signs front and rear. Notice the bull bars on Aussie trucks will have covers for these.

Get into the outback and this increases to 53.5 metres, although the same Road Train signs apply. The most common is three trailers with two dollies. But also you may see two B doubles connected with a dolly. Maximum weight is about 120 tonnes.

Anything bigger than this and you will need a permit. Because the roads are so open, with such little traffic, the local governments are receptive to new ideas. One example of this is the Volvo FH16 700 Mega Quad, four trailer side tipper operated by Bulkline Haulage in Port Hedland; 60 metres, 33  axles, running at as gross vehicle weight of 234 tonnes.

There are only three truck manufacturing plants in Australia; Kenworth, Volvo and Iveco. Kenworth is the number seller, although Volvo/Mack combined follow close behind. Kenworth is seen at the truck to have. They build a tough product designed specifically for rough terrain. Many drivers are fond of the big bonnet, as it gives a sense of protection from cattle wandering the roads at night time. European trucks are more prone to damage with the radiator sitting so close to the front of the cab also.

US style conventional do take a some getting used to, especially for someone more familiar with European trucks. But there is something very enjoyable about looking out through a split screen with a stone guard, flanked by air intakes topped off with snorkels, over a long bonnet as you travel across the remote outback.

Tomorrow, I’m catching a flight to Darwin where I’ll be helping out RTA for a few months. A lot of Australia is experiencing drought conditions, so cattle stations are beginning to get anxious due to the lack of feed. Just today, the biggest ever fodder aid convoy to depart Western Australia, has departed with 50 road trains of hay destined for farms in New South Wales.

If it doesn’t rain across the top of Australia in February, we will be flat out relocating cattle for the season. I’m not sure what I’ll be driving yet, but will keep you posted. 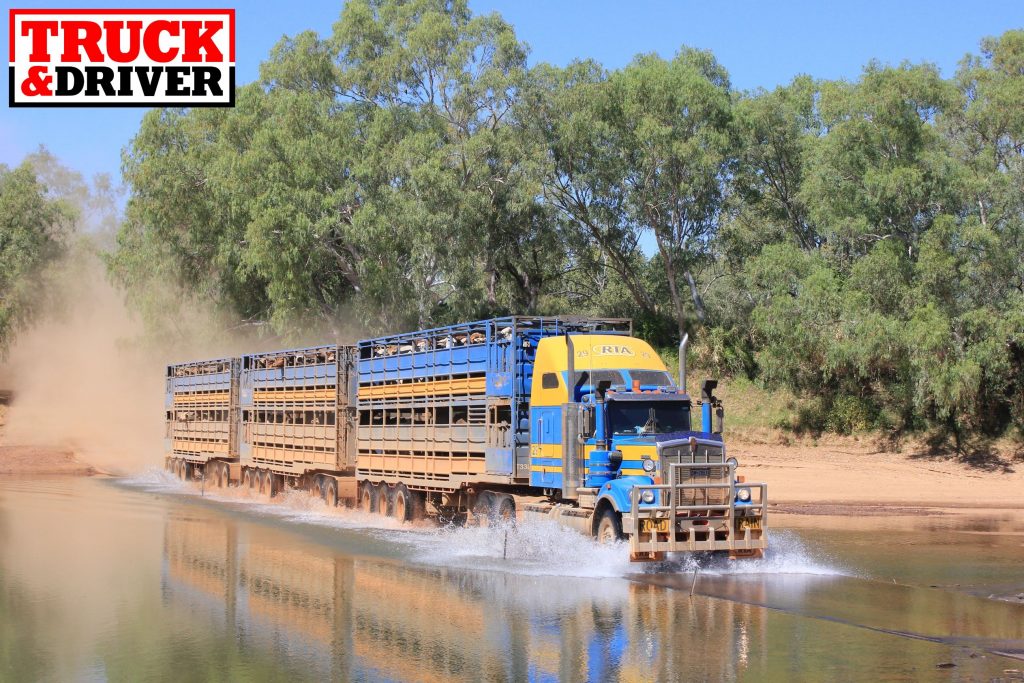