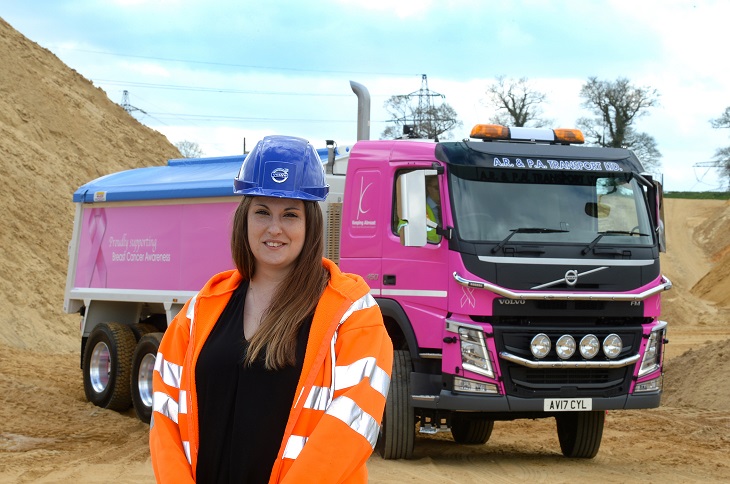 A striking pink Volvo FM 8×4 tipper can now be seen around the roads of East Anglia after AR & PA Transport took delivery of the new truck recently.

April Forder, one of the regular drivers of the truck, said the design has a special significance for her. “My Nan had breast cancer twice and both my grandfather and sister have suffered from Hodgkin Lymphoma cancer,” she said. “I wanted to give something back after all the treatment and support my family has received and I thought using my new Volvo FM as a giant billboard for breast cancer awareness and fund raising would be highly unusual and therefore particularly effective.”

The truck, which is fitted with a Wilcox Wilcolite insulated tipper body and Edbro ram, is being shared by April and her father Adrian and is hauling sand and gravel across East Anglia for use in the production of asphalt.

“I generally drive for three days and dad does the other two,” said April. “I will also use this truck for visits to schools throughout the region, where I support the cycle awareness scheme. Last year alone I visited 25 schools highlighting how we can all use the roads together with safety as our common goal.”

To this end the new Volvo FM 8×4 rigid with sleeper cab includes safety features, such as an overhead cable detector, a Brigade 5-camera system, left-turn audible alert and seven close-proximity sensors positioned along the full length of the nearside. The truck also features the Volvo’s Lane Departure and Forward Collision warning systems, as well as a handbrake that engages automatically the moment the driver’s door is opened. “I specified this truck with safety as a number one priority,” says April. “It is both CLOCS and Crossrail-compliant and while I’m currently FORS Bronze accredited I am aiming for Silver later this year.”

Externally, and to complement the wrap – which was sponsored by Volvo Truck and Bus Centre East Anglia and fitted by Chapple Signs of Stowmarket – the wing mirrors are fitted with stainless steel guards and the wheels have been upgraded to Alcoa brushed aluminium. Additional lighting and strobes are courtesy of a lower grille bar with four spot lights and LEDs and an upper grille bar with LEDs, both supplied by Lightfix.