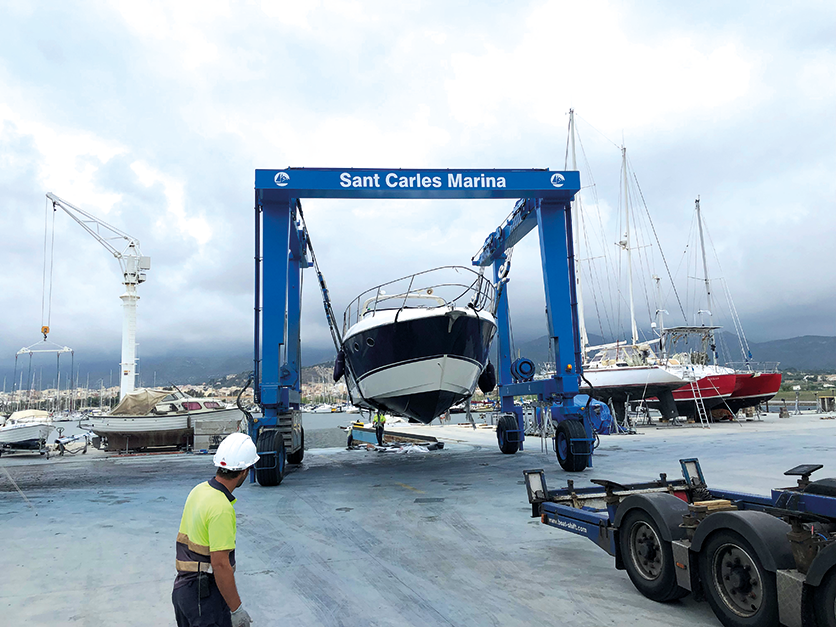 So far, this summer has been a busy one. Early bookings flooded in as boat owners looked to return their boats and yachts to the UK prior to the original Brexit deadline. Then, with the original deadline coming and going, extensions until October meant even more uncertainty. The boat owners we speak to all have their own reasons for moving back home, but it’s keeping us occupied.
Unfortunately the last few jobs from the Med have been one-way trips, as the same uncertainty has also seen a shortfall in outward-bound boats.
A couple of the boat moves recently completed have included a 43ft-long steel cruiser from Le Cap d’Agde, France and a 45ft sportscruiser from Sant Carles de la Ràpita in Spain.

Catalan regular
The marina at Sant Carles de la Ràpita in the southern Catalan region of Spain is a regular for us. Both the pilot van and truck filled up with fuel at Dover and left the UK via Eurotunnel on a Sunday evening. A few hours down the road and parking on the A28 just outside Rouen was the edge that would get us to Sant Carles comfortably in the subsequent two days of driving.
The late-morning start on Monday saw an uneventful drive down through France, from Rouen on the national roads passing Dreux and the huge cathedral of Chartres and then by autoroute and on towards Clermont-Ferrand. On Monday night we made it to a service area past Clermont on the A75.
Tuesday started with a breakfast of a pain au chocolat and my favourite café crème and then the first shift got underway. I always enjoy the A75 and traversing the Massif Central in France; it might be a hilly route but the scenery is just stunning.
With a stop for fuel at La Jonquera on the way into Spain, I was pleased to be getting just short of 11mpg from the fill at Husks, Dover. We made the marina comfortably on Tuesday evening and had a shower, a nice meal and a couple of refreshments.
Wednesday morning and time to load the boat which, with two of us to get the trailer ready, was done in no time – and as the boatyard hoist lowered the boat onto the trailer, our main priority was to get the boat sat as low as possible. Once this was done, we
adjusted our support pads and strapped down. Vita, almost 16m long, 4.5m high and 4m wide, is quite a heavy boat at 14 tonnes.
Once we were ready to go, the Spanish police were notified that we were on the road. Our
main aim was to get through the small French town of Le Perthus on the French/Spanish border, where restrictions mean we can only pass through at night. With a quick top-up of fuel at La Jonquera, we got over the border and through the first few towns.

Slower N-roads
From here on up, most of our route is national roads, so progress can sometimes be slower, but with the truck working well we were happy with some steady progress. Thursday saw us head up to Clermont and then it was across to join the N7 and north via Moulins, Nevers and then a cut across country back towards Orléans followed by Chartres, Rouen, Abbeville, Saint Omer and finally Calais. Convoi Exceptionnel routes in France can be quite testing as we have to pass through many towns and villages on N- or D-roads and not the easier autoroutes. In a way, this is one of the better bits of the job as you actually get to see so much more and meet more people.
Thursday night saw us at one of our regular Les Routiers establishments, where we had the chance to catch up with another boat haulier and pilot driver, with whom we had a very enjoyable evening meal. Leaving early on the Friday morning meant that we should be close to Calais by early afternoon. Our final fuel stop at Dreux proved the truck to be returning, with the boat on, just under 8mpg.
A quiet Calais port and smooth checking-in meant a trouble-free trip back to Dover.
Once we had the port’s escort vehicle take us through the abnormal load exit, we were quickly back to our yard just nine miles up the road – with the result that the week was finished and we were home by a very reasonable 19.30.
The weekend break over, it was a run down to Chichester marina on Monday morning to finish the trip, deliver Vita back to her owners and her new home. On Tuesday morning the truck and escort van were once again on Eurotunnel and heading south, using the same route as before but this time heading to Le Cap d’Agde, France. The job was for a trade customer of ours who had purchased the boat – a Pedro 43 – to go to the UK for some remedial works and then was to be put up for sale.

Deep keel
On arrival at the marina, the boat was afloat. It looked high. She was moved over to the hoist dock where the crew quickly had her out of the water.
This type of boat is generally single-engined, which sometimes means a deep keel. Yes, this one indeed had a deep keel! We loaded her on, once again trying everything we could to keep her as low as possible. Height-measuring equipment was the order of the day and we accurately measured the highest point to 4.73m. At this height, you have to be extremely careful of where you go in France and need to stay alert for the smallest of details that could cause you a big problem. We sometimes only have bridge clearances of a couple of centimetres.

This time the higher route home was much longer and took in a middle-of-the-night trip down through the bus lanes towards the middle of Toulouse.
The following day we were out across the lovely countryside and the vast vineyards around the Dordogne and heading towards Le Mans. It was the week before the Le Mans 24h race so we saw huge numbers of very expensive cars making their way there for the weekend’s action. Finally, it was back to Calais and the ferry home late on the Friday saw us done and dusted for the week after a much more nerve-testing drive home.
The following week the boat was delivered to Brundall in Norfolk, where it was lifted straight back into the water and went off to the workshops for the overhaul work to begin. But for us, it was job done.