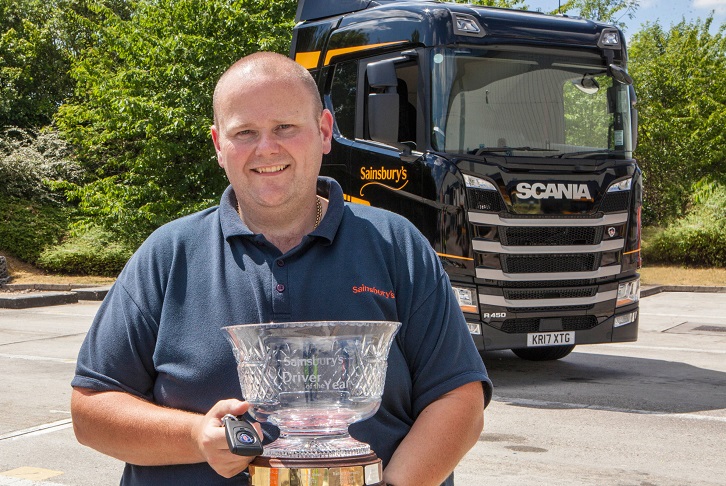 Sainsbury’s driver Chris Harris has secured the daily use of a brand new Next Generation Scania R450 after winning this year’s Sainsbury’s Driver of the Year competition.

Harris, who is based at the company’s Waltham Point Regional Distribution Centre, had to fend off the challenges of nearly 600 colleagues and succeed at local, regional and national level.

“It was a tough contest, for sure, and I was really relieved to finally win,” said Harris, who finally made it the top, after finishing as runner-up last year and in third place in 2014. “I made a commitment to myself to win, and this year I did it. What do I think of the prize? – it’s gorgeous.  I’ve had lots of phone calls from colleagues congratulating me, and everyone around here is drooling – it’s a great feeling!”

The Sainsbury’s Driver of the Year competition involves a series of demanding tests. It includes drivers having their performance monitored for a month, then top scorers sit a theory test, followed by a hazard perception session, from which three drivers from each depot are selected to go forward to the national final.

The national final is a 2-day event that tests drivers’ skills in on- and off-road conditions in a variety of vehicles together with an economy trial, a number of track-based activities and a manoeuvring and vehicle defect challenge.

“Now in its ninth year, the Sainsbury’s Driver of the Year is a demanding competition, which thoroughly tests our drivers in a wide range of situations,” said Sainsbury’s regional operations manager, Martin Wilkinson. “As such, it’s an event which recognises and celebrates the professionalism of driver colleagues throughout our network.

“I am delighted for Chris, who has deservedly won a place in the national final for the past three years.  That consistency is a testament to his driving skills.  I’m extremely proud for him from both a regional and local perspective and, as our event is open to our third party logistics providers, it’s great to see a Sainsbury’s driver come out on top.”