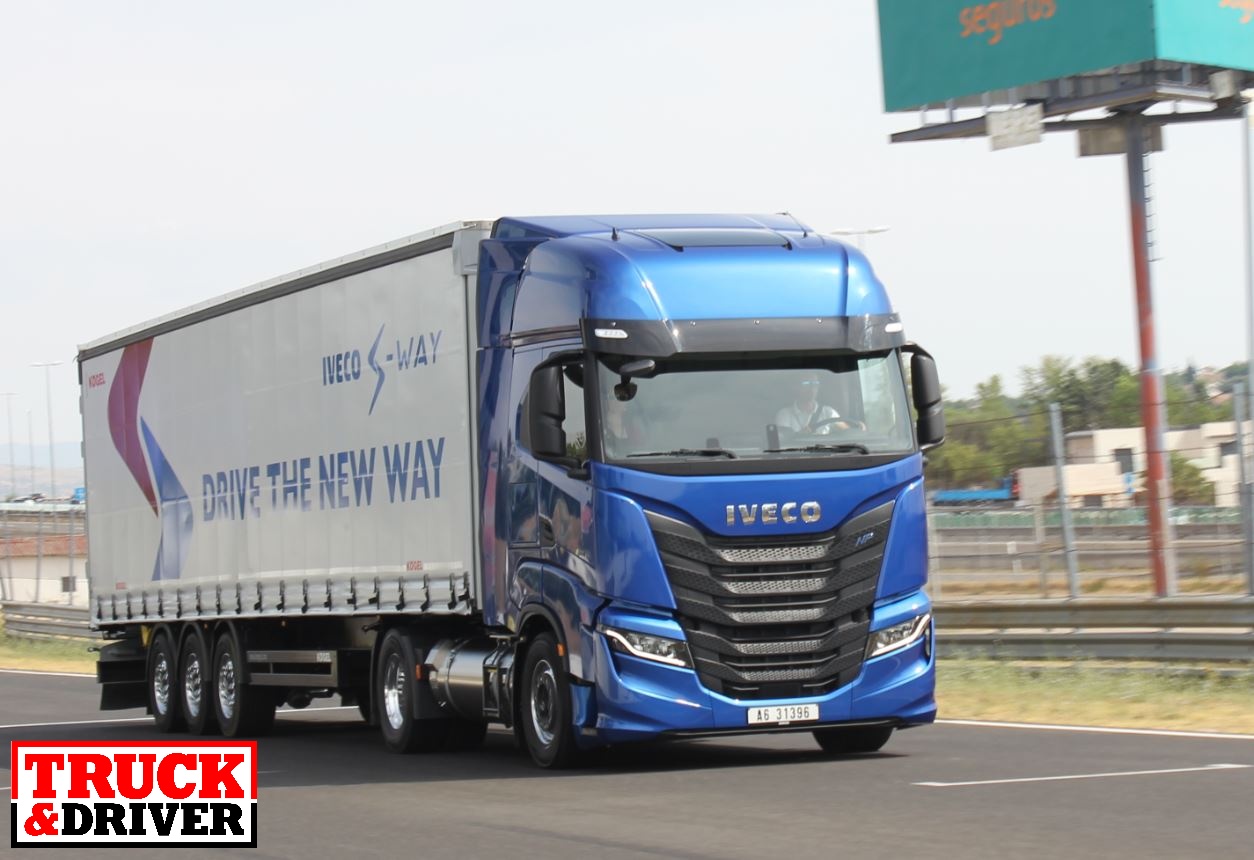 The long-awaited replacement for the Stralis was revealed in Madrid this week. Iveco’s new S-Way (S stands for Sexy, or maybe Strong. We can’t remember which). There’s a new cab and loads of new technology. The truck has to hit the ground running in terms of economy and reliability, and crucially it has to be appealing to drivers. We got the opportunity to take a short drive in a 460 LNG gas truck, and a range-topping 570 diesel. Here’s some essential information, and our initial thoughts on the new truck.

Iveco has made great efforts to streamline the cab as much as possible to aid fuel economy. Aerodynamics are expected to be class leading.

The slanted front lights contain the indicators, main-beam and fog-lights, which also operate as cornering lights.

Unlike the Stralis, the front bumper is now in different sections, so if one gets damaged you can replace an individual part instead of the whole thing! There is a metal bumper as standard on the X-Way construction model, which is also an option on S-Way.

The internal step has been lowered, there are still three steps into the cab and the interior height is 2150mm. The overhead lockers are much bigger and the upper bunk drops down to provide a netted storage area. A large fridge-freezer is located beside the driver, with a storage box to the side. There are two large external lockers on each side.

A common Stralis complaint was that the seat was too high. The S-Way has a brand new seat, which is mounted 60mm lower. There’s a flat-bottomed steering wheel, and more space for your knees around the steering column. The standard mattress is now thicker and softer too.

The standard radio now has DAB, and can be hooked up to aftermarket camera equipment. It’s also got truck sat nav, Bluetooth and voice recognition. The truck is also equipped with numerous USB charging points.

Iveco were really keen to push their new connectivity and telematics systems. All the data from the truck is available in real-time so Iveco and the operator can monitor the vehicle and potentially identify issues before they occur. The diagnostic system can be accessed remotely for fault finding and software updates. There’s a new driver evaluation system too which rates your driving based on economy, safety and anticipation.

Engines carry over from Stralis

Iveco has brought in a complete new range of engines since 2016, starting with the XP diesel range, and the NP “Natural Power” gas, so these along with the TraXon gearboxes are ready to go straight into the S-way. This means 11-litre diesel up to 480hp, 13-litre to 570hp, 9-litre gas at 400hp and 13-litre gas at 460hp.

Climbing behind the wheel of the S-Way, and you’ll find the dash very similar to the Stralis. Some of the switchgear is identical, such as the indicator and engine-brake/gearshift stalks. It’s logical and it’s simple; which is arguably a good thing in this era of greatly increasing complexity. The steering wheel is lovely, and now houses the cruise control functions, and much improved phone and audio controls. The driver seat position is much better, no need to drive with the air dumped from the seat any more! The new fridge is bigger, but we will miss the large bottle holders from the Stralis, which were perfect for flasks.

It’s simple and well designed and there are many improvements. However, there’s too much black plastic and it’s probably too similar to the Stralis. Some chrome-metal-wood embellishments would easily transform the dash. Driver appeal and perception is key – but will the Italian bosses take it on board?

This is only a brief impression, but it looks like Iveco has done the business here. The steering feels good and the mirrors are much improved. The brake pedal still requires more pressure than any other truck. If you’re been driving other new Euro 6c/d trucks, you’ll be surprised at how high-revving and lively the engines are. The Cursor powerplants work across a much broader rpm than some competitors, and the TraXon gearbox is far more likely to drop gears in this application than others. On both laps of the test track, the 570 dropped from 10th into 9th and then 8th quickly after. We’d have held onto 9th quite happily, and some rival trucks would have ground the whole gradient in 10th.

The 570 has some impressive grunt too, and we reckon even supertruckers might have to grudgingly admit that the S-Way is, as far as trucks go, quite a sporty drive. Of course, the new driving assessment software won’t like you doing that, we were marked down for harsh acceleration continuously. The 460 gas truck proved again that LNG is a genuine alternative to diesel.

The S-Way certainly looks the part on the outside. It drives well, and it’s got potentially class-leading connectivity to maximise efficiency and uptime. While the interior is much improved and the cab layout is excellent, the dash and switchgear do not look like they’re from a brand new truck, it’s very similar to the Stralis. This means it’s logical, and simple to use and the antithesis of having iPads in the dash instead of switches as per the new Actros.

But it isn’t going to make drivers want to hand over the keys to their S-series, FH or XF. In the UK market, driver appeal and perception is key. We note that the Magirus special edition truck features some upgraded trim, and we would implore Iveco to ensure the UK trucks don’t all come specced with swathes of plain black plastic Stralis-esque trim. Iveco has done all the hard work with their new truck, we hope they don’t have a blind spot when it comes to the finishing touches, the easy stuff. This truck has so much potential. The question is, can Iveco maximise it?