Here’s one that’s sure to cause some debate among drivers… are certain areas of the country notably better than others for those who drive for a living? Here’s a story submitted to us by personal finance research site Nimblefins, who compared average salary, job availability and the cost of living across the UK and found the East Midlands the best place to be a large goods vehicle driver.

THE best and worst places to be an HGV driver have been revealed in a new study into wages. 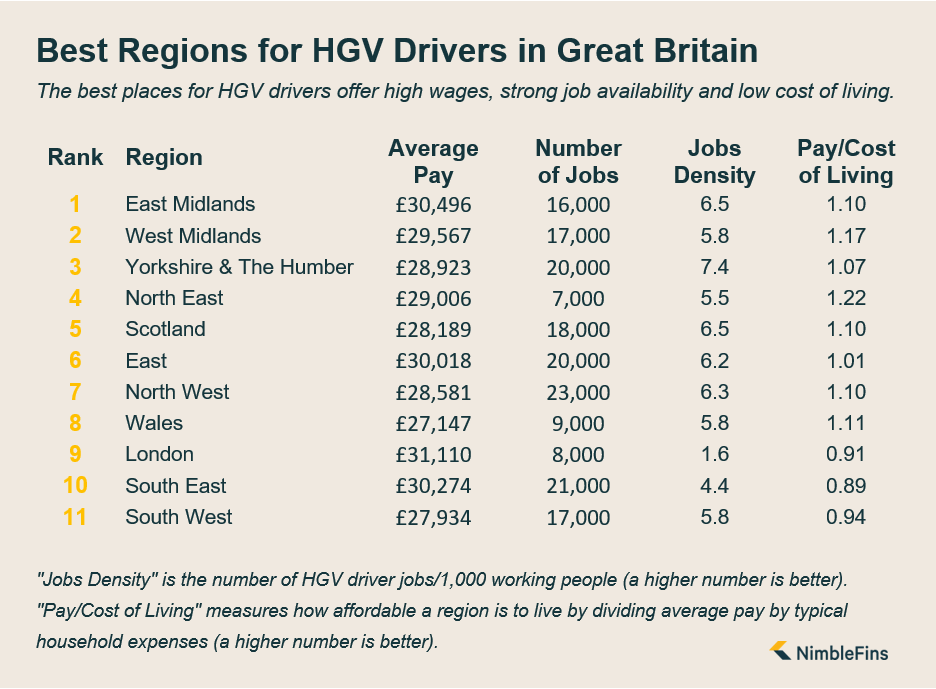 With more than 183,000 large goods vehicle driving jobs in the United Kingdom, haulage is an attractive career for many. But drivers can be in a better or worse position simply due to the area they live, with wages – and bills – fluctuating across the country.

While its £30,496 average salary wasn’t as high as those in London (£31,110), this was more than compensated for with the lower cost of living, as well as the number of jobs available.

Indeed, cost of living was so high in the capital, London only came ninth out of 11 regions in the research.

Job availability in the East Midlands is 6.5 per 1,000 people, coming second only to Yorkshire and Humberside (7.4).

About 9% of all East Midlands jobs are related to logistics and 140,000 HGV journeys are completed per day in the area. And in 2017, the 4.0% unemployment rate in the East Midlands was one of the lowest in the UK, making the area attractive for job seekers in the transport industry.

Not far behind the East Midlands is the West Midlands. Although salaries are lower (£29,567) the cost of living is also lower, giving the region a score of 1.17 when dividing average pay with household bills. This is second only to the North East (1.22) meaning drivers have more disposable income in these areas.

Yorkshire and the Humber has the best jobs availability for the sector, with 7.4 jobs per 1,000 people living in the area.

While the Yorkshire and the Humber economy now relies less on businesses that need road transport, such as large-scale industry, manufacturing, textiles and agriculture, output of these traditional industries in the region is expected to grow and remain an important part of the local economy.

At the bottom end of the table the South West has the second lowest wages at £27,934 and also the worst ratio of salary going on household bills (0.94).

Despite Wales having the lowest salary at £27,147, it jumps up the rankings to sit at eighth position due to its cheaper cost of living.

Erin Yurday, CEO at Nimblefins, said: “This interesting research shows the best paid jobs do not necessarily give the best quality of life. Many aspects need to be taken into consideration, such as house prices or rent.

“The Midlands, the North of England and Scotland are clear winners for HGV drivers, and the best places for work tend to be those with strong transport links.

“Jobs in the South of England may pay better, but the cost of living and job availability makes it a tougher slog to make a comfortable living.”