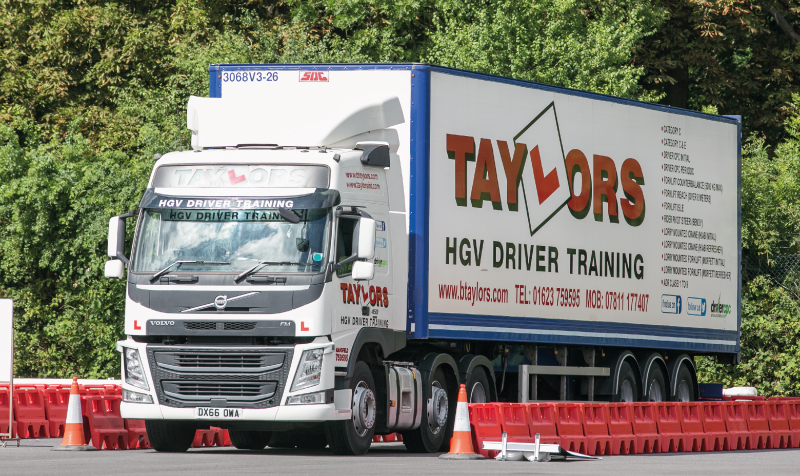 Non-HGV-holding visitors to the Convoy in the Park event will be able to take part in a supervised driving experience using two of Nottinghamshire haulage group Taylors Transport’s artics, an offer organised in conjunction with and to raise funds for the local arm of the Rotary Club. The supervisors will be two of the instructors from Taylors’ own HGV driver training arm which, uniquely, is the only haulier-owned school in the country with its own on-site examiner, and caters for both external and internal trainees.

“It’s a great facility, and it enables us to take prospective new drivers on, put them through their test and then give them a job at the end of it,” Alan Taylor, MD, Taylors Transport

This has helped a great deal with driver recruitment, with roughly a 50/50 split now within Taylors’ own fleet between these such apprentice-type drivers and experienced drivers who have joined from elsewhere. New drivers are sent out with a mentor to start with, and begin by doing local jobs and shunting, while those coming in from other firms are given other work.

“Driver retention is all about fitting pegs in holes,” MD Alan Taylor comments.

“We’ve got a variety of work, from general haulage to pallet network and night trunking, so there’s no point putting them on nights out if they don’t want nights out. You’ve got to have an understanding of what they want if you want them to stick with it.”

Some of Taylors’ longest-serving staff have been with the business for more than 30 years, but all have been through the same induction process, regardless of how long they’ve been behind the wheel.

“Am I a CPC believer? Yes,” Alan assures us – CPC training being something else the firm provides.

“Even if they’ve been driving a long time, people get complacent, so we’ve got modules on everything from strapping to walk-round checks, and even one which incorporates what to do in an accident.”

But the important thing is that everyone who comes to Taylors’ door is given a chance, because that’s what this operator is all about, and why the firm puts so much time, money and effort into its presence at Convoy in the Park.

“People ask what we get out of it and I’m not sure really,” Alan confesses. “It gets our name out there, we get closer to our customers and we and our staff enjoy it. Whether it’s worth it I don’t know – but I’d rather spend the money on this than on flashy sports cars. That’s the way this business is run, you see. It’s all about looking after people. At least I can sleep at night because I try and keep people right.”

You can visit Taylors Transport’s stand at Convoy in the Park on 10-11 August. Get your tickets here.

You can read more about Taylors Transport in the Summer Special issue of Commercial Motor magazine. Coming out on 8 August, this bumper issue will feature 16 extra pages! Subscribe and get your copy delivered to your door.