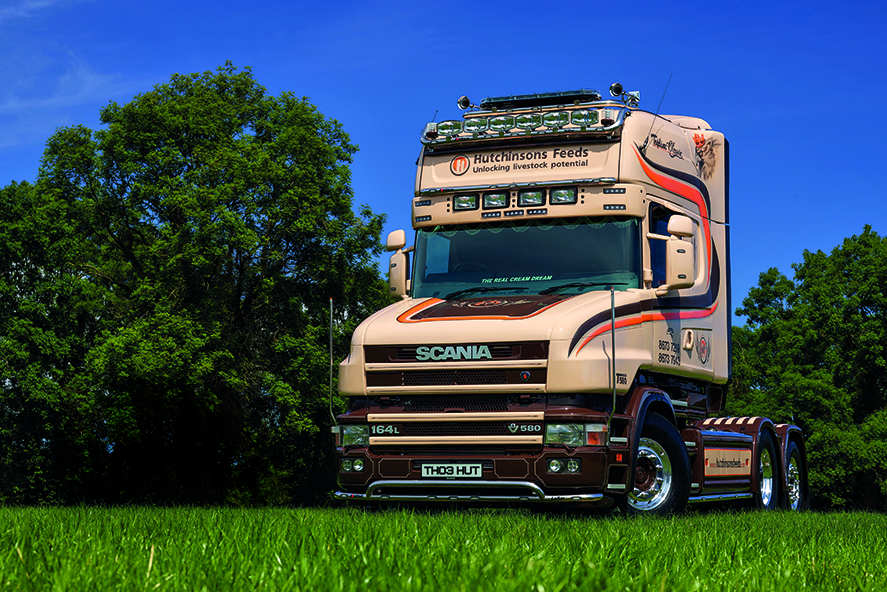 Built to celebrate Hutchinsons Feeds’ diamond anniversary, we reckon this is the classiest T-cab to hit the road this year.

Hutchinsons Animal Feeds was established as a limited company in 1956 – and to celebrate the 60th anniversary, the family-run firm from Northern Ireland put this awesome Scania T-cab on the road… in 2019! The build took (three years) longer than anticipated but, as you can see, the end-result is very much worth waiting for.
Company director and third generation in the business Michael Hutchinson has been the driving force behind the T-cab. The company runs an immaculate fleet of Scania and Volvo trucks, notable for their cream, brown and orange livery, across Northern Ireland.
It all started when Michael’s grandfather, Sandy, started mixing his own feed for his pig farm. He was soon being asked if he could supply the feed to other farms and things grew from there; he went from mixing feed in a wheelbarrow to moving it in sacks with a little Bedford.
Today’s fleet will collect the raw feed materials from Belfast docks, take them back to base where they are processed and then delivered to farms. This means there’s a variety of vehicle combinations to get into all sorts of tight locations and they include some four-axle artic outfits, one rigid and a mix of tag-axles, midlifts and mini midlifts.

One of the oldest trucks on the fleet is a 51-plate Volvo FH12 420 which was treated to refurbishment in 2018. The company’s trucks are well looked after, and the fleet also includes two 51-plate FM12s still providing reliable service.

Change of plan
“We had always wanted a Scania 143 and a T-cab because they’re the most iconic, most famous trucks on our roads,” says Michael. “We have a 143 which is currently stripped down. To be honest, we started it before the T-cab and it was originally planned to be the anniversary truck. But when the T-cab came on the scene, we ended up devoting the time to that instead.” Michael looked at a number of different T-cabs before he found this one, which was almost exactly what he was looking for.

“We weren’t going to change the engine to a V8, but once we had removed the old one it seemed a bit rude not to!”

“Some of those we looked at were conversions – R-cabs changed to T-cabs,” he explains.’Which means you don’t have the flat floor in the cab, and the paperwork will say R instead of T. I wanted the genuine article, ideally with Topline cab and a tag-axle, so it took a while.” T-cabs were sold in right-hand-drive guise in the UK in the late ’90s and early 2000s, and there was a variety of specs – flat roof or Topline, 4×2, midlift, tag, double-drive, six- and eight-cylinder engines. As you’ll probably know, they weren’t around for long, and original examples are always sought after.
The truck here, bought new by Bulmers Logistics of Teesside, was well specced; it has the unique 4-series bunk above the windscreen, lockers on the rear of the cab and a microwave. Charles Lauder of Dumfries also owned it. It was originally a 124 420, meaning it was a 12-litre six-pot. Michael bought it from a company called NT Waste, where it was a working truck, employed on hauling flat trailers. The original idea was to paint the truck in Hutchinsons colours and tidy it up in the same manner as the Volvo FH had been. It was in good condition for a 2004 truck, so that plan would have worked out fine. But when it came to painting, the engine had to be removed to get to the inner chassis (as the cab does not tilt) and it all snowballed from there.

Simple initially…
“It was a simple project to begin with,” says Michael. “We weren’t going to change the engine to a V8, but once we had removed the old one it seemed a bit rude not to!” he grins. “Once we stripped one part off the truck, we stripped another and just went deeper and deeper until it became a full nut-and-bolt job with the intention to build the truck ‘as new’.”
Hutchinsons mechanic Simon Bryson is the man responsible for all the mechanical work and Michael is full of praise for his effort and the quality of his workmanship. “Everything on the truck has been done to Scania standards. There are genuine replacement parts throughout, from pipes, valves and bushes to fittings,” he says.
A 15.6-litre 164-spec 580hp V8 was sourced for the truck, fully rebuilt to ‘as-new’ condition by McElvaney Motors and fitted by Simon to the original 12-speed manual ’box. The engine has been painted in cream to match the truck and it’s kept absolutely spotless too.

Wiring replaced
Wiring was required for the new engine and the dash loom had to be replaced. McElvaney Motors was also able to supply a spare dashboard, while Simon changed all the wiring from other sources to ensure it was all exactly the same as it was from the factory – not an easy task. There are no spliced wires from one loom to another here, while the additional lights, including those on the side and perimeter, are also meticulously wired, utilising the original Scania wiring looms, conduit and routing; you’ll find no stray wires anywhere either.
In the cab, the fit and finish is as if it were new. Seats and steering wheel have been retrimmed in top-quality leather and, aside from some 6×9 speakers in the rear wall, the rest of the cab is as Scania intended. With its flat floor, it’s amazing how much room there is in a T-cab. There’s a big bunk behind the seats as well as the one above the screen, and the original Scania trim panels, plastic and fabrics are all in superb condition. Michael has given some thought to a retrim in the future but, if he does go ahead, it’ll be a match for the original trim.

Historical mural
The truck was sent to Adrian and Chris Kerr of Kerr Bros Bodyshop, where the chassis was blasted and a full respray carried out in the traditional mushroom cream and brown.
Brendan Campbell of Graphix 4U created the mural on the rear of the cab, detailing many of the lorries Hutchinsons has run over the years, including the earliest Bedfords and a much-loved Volvo F7. The twin Eminox stacks are original items that were fitted to the truck when new – in our opinion, you can’t get a better-looking set of stacks than these. They sound as good as they look too; that original V8 note rather than the harsh racket provided by straight pipes. All the fabrication work, including the suzie frame, was done by Simon and Michael and, while you can see the fantastic standard of fit in the pictures, to really appreciate how meticulously this truck has been put together you have to see it in the metal. 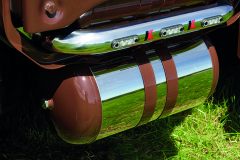 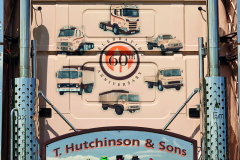 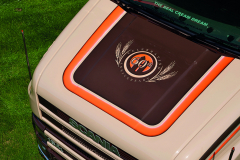 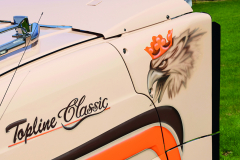 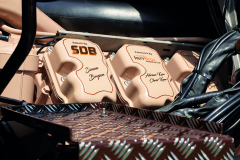 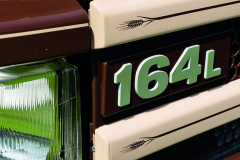 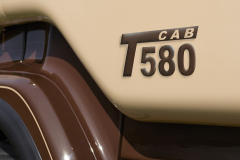 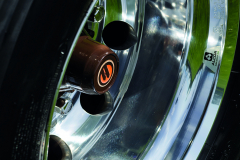 Assen outing
The truck’s first outing this year was across the border at the Full of the Pipe show, where it scooped two awards, one for best T-cab/American and another for Best Lighting. Michael took the truck to the Truckstar show at Assen in July and it also went to the Causeway Coast Truck Festival in August, where it won Truck of the Show. “Assen was a brilliant weekend,” he says. “I had never been to the event before, and it’s a different world over there with both the trucks and the way shows are done.”

The truck’s an attention- grabber. Michael is always happy to answer questions, and he’s been taken aback at just how big the reaction to the T-cab is. “It’s non-stop all day at a show,” he says. “It would be nice to do more with it, but it’s getting the time off to prep it and so on when there’s the business to run and making sure the trucks are going.”
Although the shows are great, what Michael really enjoys is driving the truck. There really is nothing like a T-cab, seeing that big bonnet in front of the windscreen and the reaction the truck gets on the road. With so many new parts, and such a high standard of workmanship, the truck drives superbly

No show pony
“It’s really nice and tight, it’s like new,” he says. It’s not just a show pony either – Michael’s had it out working. “I’ve done a few loads with it. I’ve had the molasses tanker hooked up and when I went to Assen I did a load from Liverpool to Ashbourne in Kent and brought a new Crane Fruehauf trailer back with me.
The truck has been warmed up properly a few times now!” Getting a load on a truck’s back, especially one with the specification this has, is where you get to experience it properly. The roar from the exhaust, the engine note, the growl from the retarder; it’s exhilarating, an experience that you just don’t get with a new truck. The big V8 takes it all in its stride and Michael points out that it’s the best thing for it. “I’ll use it regularly for work apart from in winter when the salt is on the road. It’s better to keep all the components working, and the Scania’s just brilliant to drive as well.”

T-cabs in the UK, 1997-2005
Scania’s 4-series T-cab was launched in 1996 and, like the R-cab, was designed by Bertone of Italy. Initially available only in left-hand-drive configuration, there was such demand from the UK for the T-cab that right-hand-drive versions arrived in late 1997.
The trucks tended to be popular hauling tankers or tipper trailers, as a full-length 13.6-metre trailer would send the combination over the length limit. Heavy haulers also liked them for STGO work where the length was not an issue. From a driver’s point of view, the space afforded by the flat-floor cab was class-leading, and the ride comfort provided by sitting behind the front axle rather than over it was superb.
Despite the iconic status of the T-cab, it wasn’t backed up by worldwide sales and in 2005 Scania announced that the bonneted range would be phased out, just after the new P/G/R/T-cab ranges
replaced the 4-series. Fewer than 1000 examples were sold globally in 2004 but about 20,000 4-series T-cabs were built in total.