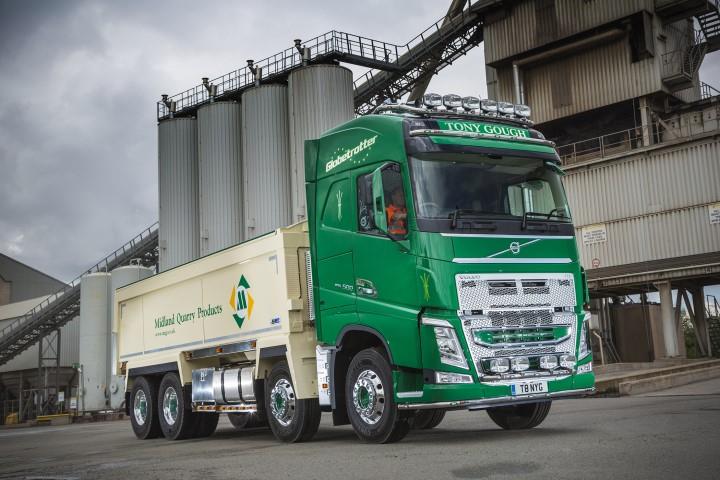 Owner operator Tony Gough is celebrating the 20th anniversary of the founding of his transport business with the purchase of a very special, new Volvo FH-500 8×4 tipper. It is believed to be the first Globetrotter cabbed new-series FH 8×4 in the UK to be bodied as a tipper. Tony, who operates the top-spec new FH in the livery of Midland Quarry Products (MQP), has been a Volvo customer for the whole of the twenty years he has run his own transport business. His first Volvo was an FL10-320 8×4. “It was a good truck that served me well,” he says. Since then, he has operated several FM-460 Globetrotter-cabbed 8×4 tippers, all on asphalt work. These proved a popular buy in the used truck market when the time came to sell them on and, says Tony, he could have sold the last one, which was on a 2011 plate, “twenty times over.” His new FH operates out of the MQP coated stone plant in Wednesbury and also Clee Hill Quarry in Shropshire. Tony has invested a great deal of thought in customising the FH with a number of unique finishing touches. Like, for example, the polished stainless steel finishing strips down the rear edges of the cab side extenders. These were designed by Tony and set off by twelve, rearward facing LED lamps (six a side) which double as markers, indicators and extra brake lights. Other personalised touches include the green LEDs in the Kelsa light bars and the custom cut, polished stainless steel door handle bezels. Stainless steel tool boxes, polished aluminium air tanks and a neat side guard arrangement complete the well thought out custom spec.

With average annual mileage forecast to be less than 30,000 kms, Tony is planning to keep the new FH for two years and admits he already has a buyer for it at that time. When work is busy, Tony’s wife and business partner Lisa drives the truck on the night shift. Typically, deliveries are carried out within a one hour drive of the plant. Much of the job involves tipping asphalt into paving machines at roadworks, including many in urban areas. This entails a great deal of stop-start driving where the I-Shift automated gearbox is a major boon, he reports.