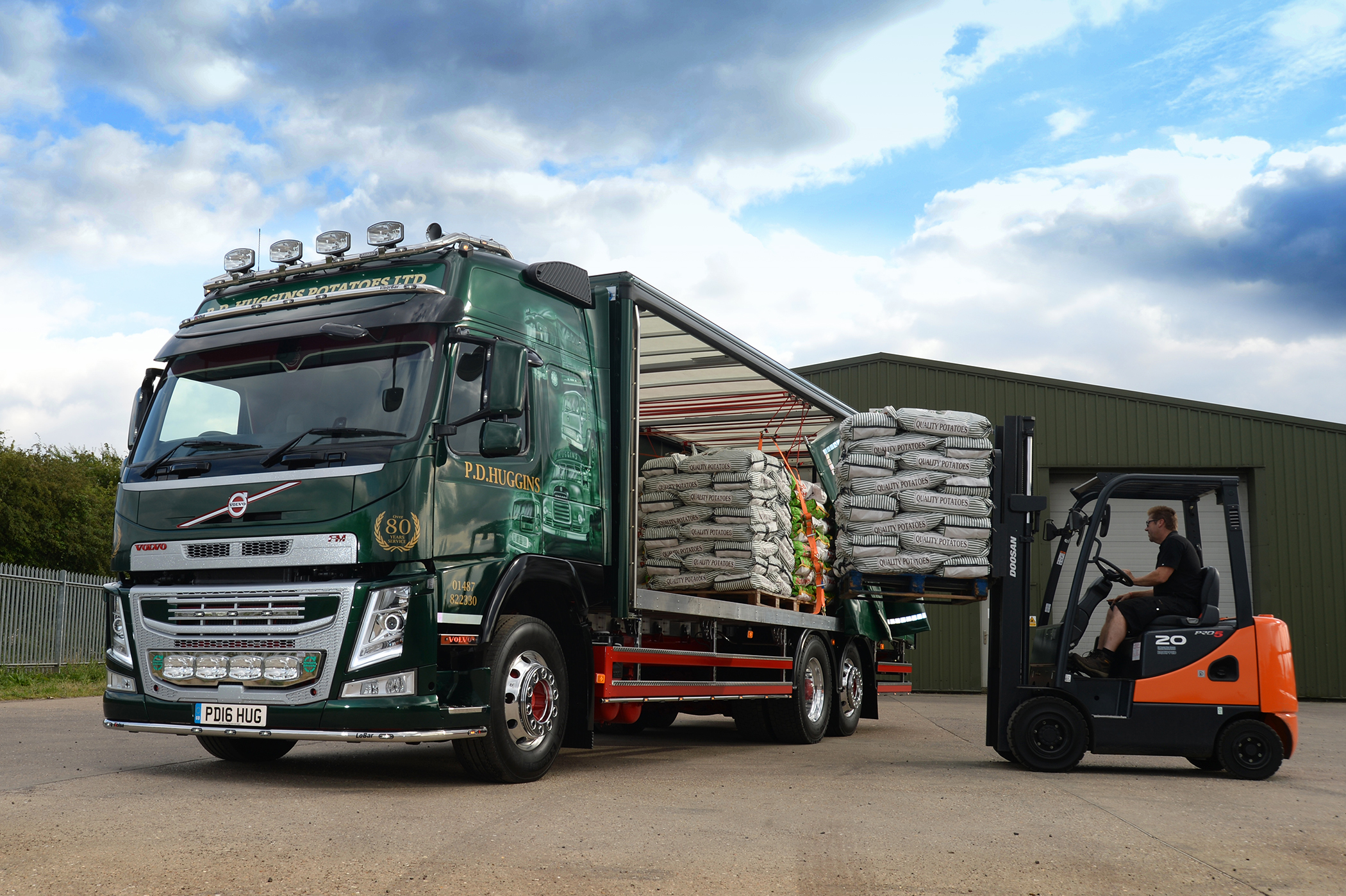 P. D. Huggins Potatoes stunning new Volvo FM-330 6×2 rear-steer rigid, with air suspension on all axles, provides the ultimate driving comfort environment for deliveries of an essential ingredient that is one half of what has been dubbed by its aficionados as ‘the ultimate comfort food’.
The FM is used by the Warboys, Cambridgeshire-based operator, to make deliveries of potatoes to suburban London-based chip shops to be used to make that ultimate traditional comfort food – fish and chips.

The FM was spec’d up by owner Paul Huggins for driving comfort and safety. The specification includes Volvo’s Driving Plus, Visibility Plus and Dynafleet packages, together with air horns, a load indicator, adaptive cruise control, forward collision warning, lane keeping warning and electronic stability programme as well as an all-round camera system.
“Essentially, I wanted the Volvo and the high specification to make what is a difficult job worth doing,” explains Managing Director, Paul Huggins. “The all-round air suspension, the astounding manoeuvrability thanks to the rear-steer tag-axle, the super quiet Globetrotter cab, with leather steering wheel and leather upholstered, deluxe driver’s seat, that’s both suspended and heated/ventilated, all combine to create the most comfortable work environment possible. Furthermore, the 12-speed I-Shift automated transmission is just fantastic.”

“Collecting potatoes from all over Cambridgeshire and Lincolnshire and then unloading/loading them at our 230m2 insulated potato store is relatively straight forward and all done with the aid of forklift trucks, but when it comes to delivery in Greater London the job becomes very manual,” says Paul. “It’s normally a case of off-loading sacks of potatoes by hand and then wheeling them down the street on a barrow. It’s hard work.”

The new truck is powered by the 11-litre Volvo D11K engine producing 330hp and up to 1600Nm of torque. “I generally only put somewhere in the region of 12-14 tonnes of potatoes on board because of the fact they have to be off-loaded by hand,” explains Paul. “As such, the 330hp engine is more than enough. I am optimistic the fuel economy, for what is essentially multi-drop work, will beat the 9.2mpg returned by my previous Euro-5 version.” Paul is the third generation of Huggins to be involved in potato haulage. “My grandfather, Sidney started the business in 1934,” recounts Paul. My father, Ken, then ran it with the support of me and my brother Richard up until about 10-years’ ago, at which point I took over and Richard set up independently. Dad, who’s now 70, still works with me, collecting potatoes from the farms while I concentrate on deliveries.”

To reflect this rich history, the new Volvo FM boasts a very traditional paint job. An eye-catching red chassis and engine is complemented by a moss green cab painted by Kurt Hobbs Coachworks, which also built the curtain side body featuring a polished stainless steel frame. The cab and rear doors are adorned with artwork by Paul Yeoman of St. Neots and depict many of the trucks used by the company over the years including Sydney’s very first Fordson, which shares the rear doors with a Volvo FM.
“I think the truck has a traditional look to it but with a very modern feel,” concludes Paul.

I think that Biglorryblog agrees