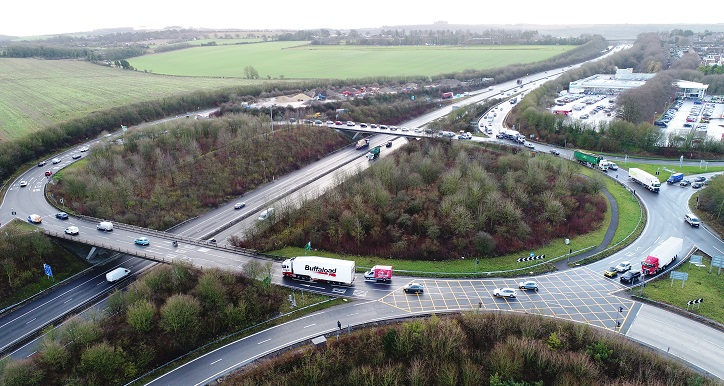 Junction 9 of the M3, where it meets the A34 near Winchester could be redesigned to create dedicated free flow lanes that will allow drivers travelling between the M3 and A34 to avoid using the junction roundabout, if plans are accepted.

Under the plans, the roundabout itself would be redesigned into a new ‘dumbbell’ layout, which would increase capacity, improve safety and make journey times more reliable, according to Highways England.

Highways England project manager Simon Hewett said: “Junction 9 is a vital interchange between the M3 and A34. With more than 6,000 vehicles using the junction each hour during peak times, it can often become congested, with queues backing up onto the main carriageway.

“The proposals… will resolve that by separating out local and long distance traffic. With the new dedicated link roads, through traffic will not have to stop at the roundabout, freeing it up for local traffic and commuters.”

About 110,000 vehicles use the junction every day, including over 5,500 HGVs, from Southampton and Portsmouth Docks.

The proposals will also help to support developments at Southampton container port, which are expected to increase freight traffic on the M3 and A34 by one third of the current levels.

Dr Mike Short CBE, chairman of the Enterprise M3 Local Enterprise Partnership said: “This scheme is key investment in our transport infrastructure to support the local economy, by easing transport congestion, which businesses in our area state is a major barrier to growth.

“The improvements to junction 9 are critical to enhancing the strategic corridor that runs all the way from the Port of Southampton to the Midlands and the North, which will help to rebalance the national economy. This corridor has a major national and regional strategic role and this improvement scheme is very welcome.”

Funding for the scheme comes from the Department for Transport’s £15 billion Roads Investment Strategy, announced in 2014, which is providing people with better journeys, cutting congestion and improving the economy.

A public consultation on the proposals runs until 19 February.