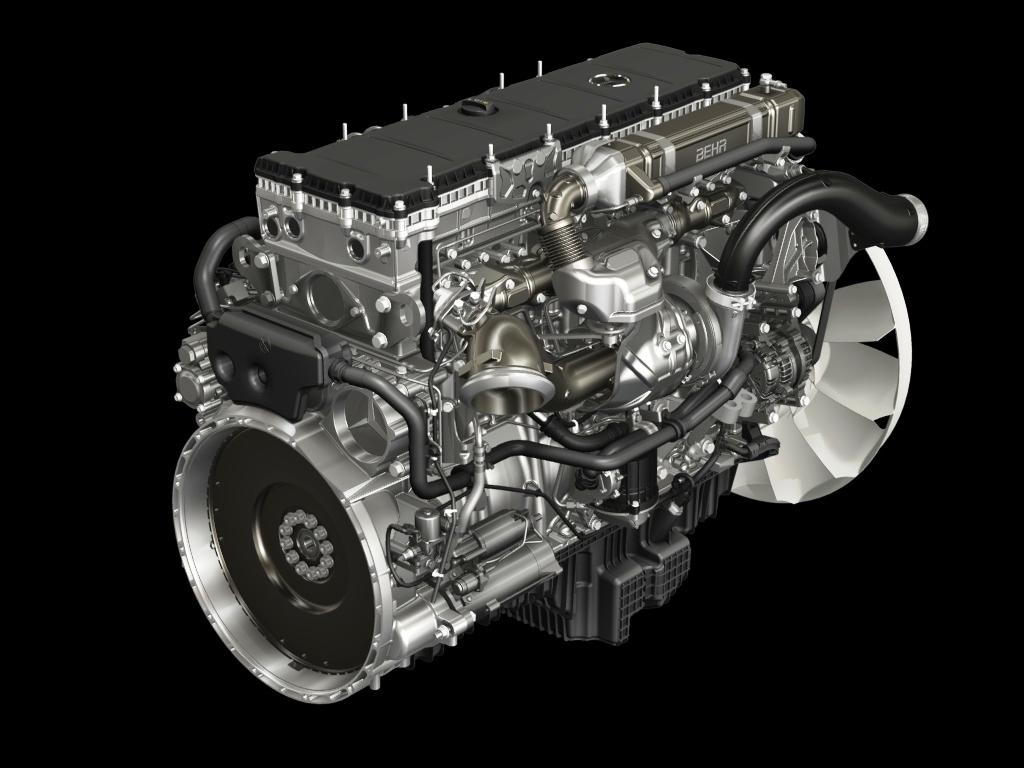 After the recent arrival of New Actros with its 13-litre OM471 ‘HDEP’ straight-six engine, word reaches Biglorryblog that Mercedes-Benz is further extending its range of heavy-duty truck and bus engines. The new vertically-mounted six-cylinder in-line 470 engine, with a displacement of 10.7 litres, spans an output range from 240 kW (326 hp) to 315 kW (428 hp). This compact, lightweight and highly sophisticated engine will be manufactured from June of this year at the company’s () engine plant. It marks an expansion of the company’s “New Engine Generation” through the addition of “BlueEfficiency Power”. The six-cylinder in-line units, which cover the range from 240 kW (156 hp) to 375 kW (510 hp), are designed to fulfil all the most common requirements for both trucks and buses. All the engines, without exception, already comply with the future emissions standard Euro VI. What trucks will they go in? Well my guess is light-weight distribution fleet tractor versions of New Actros as well as multi-wheelers and the drawbar rigids too…I’ll see what Mercedes has to tell me.
Meanwhile, according to the Daimlermedia website “The new engines are tailor-made for light- to heavy-duty distribution transport and for service in light- and medium-duty construction and long-haul transport.”

Lightweight: just under one tonne

The new engine is built on the basis of the trailblazing heavy-duty  471 model series launched last year. However, with an eye to its specific use in trucks and buses, it has a few individual touches of its own. With a weight of just 990 kg according to DIN 70020-A, the new 470 is the ideal engine for use in weight-critical situations. Along with exceptional economy and robustness, environmental compatibility remains a key focus. Right from the start, the new  470 will only be supplied in versions that meet the Euro VI emissions standard.

Specific offering for trucks and buses

The new six-cylinder in-line Mercedes-Benz OM 470 is available in the following four versions for trucks:

Due to their specific operating profiles and to the different configurations of transmissions and rear axles, the engines for use in EvoBus buses and coaches are slightly different. For urban buses the 470 is available in two output and torque combinations:

For rural-services buses and touring coaches, Mercedes-Benz produces the new 470 in three versions:

The result is a tightly graduated range of output and torque combinations, matched to the specific operational requirements. At the lower end of the spectrum the new OM 470 picks up where the equally new OM 93x model series finishes, while at the upper end of the scale the range merges seamlessly into that of the OM 471.

Successor to the 457: lightweight, clean and even more robust

The new OM 470 achieves the performance of the current  457, yet from a displacement of 10.7 litres rather than 12 litres. The compact 470 also manages to improve upon the robustness of its famously reliable predecessor. At the same time, even with the additional components it needs to achieve the Euro VI emissions standard and its sturdy design, it actually weighs around 50 kg less. And last, but not least, despite the more stringent requirements of the Euro VI emissions standard, the engine manages to undercut the fuel consumption of its predecessor.

With a weight according to DIN of just 990 kg and compact dimensions (length 1287 mm, width 1130 mm, height 1175 mm), the engine is not only ideal for trucks and buses used in weight-critical situations, but also for installation where space is constricted.

Both the rated speed of 1800 rpm and the engine speed of 1100 rpm at maximum torque are the same as on the 471. The new  470, however – even allowing for transmissions with a broad ratio between first and top gear – is even more clearly trimmed for driveability. Even at engine speeds well below 1000 rpm, the engine offers impressive traction: at around 800 rpm the engine is already able to deliver 95 percent of the full engine torque.

The maximum torque remains constant up to 1400 rpm, at which speed the engine reaches pretty well its maximum performance. This characteristic curve ensures that it has plenty of power in the main operating range, so giving it “bite”. Also adding to the pulling power of the new 470 is its long-stroke configuration with a bore/stroke ratio of 125/145 mm.

In terms of robustness, the new 470 certainly does not lag behind its bigger brother. The crankcase here is also made out of a special cast-iron alloy, and the cylinder head of vermicular, or compacted, graphite iron (CGI). In the interests of durability and in view of the strain imposed by ignition pressures of more than 200 bar, the pistons are made out of steel. Oil-spray cooling, oil cooling ducts, wet cylinder liners and a sophisticated cooling system ensure optimum cooling at all times.

The quiet and efficient gear drive that operates the two overhead camshafts, as well as other ancillary components, was completely redesigned for the 470. It is located on the output side of the engine and provides an example of the engine’s weight-optimised construction.

The two overhead camshafts of the 470 are composite in design, as in the other new-generation engines, rather than being milled out of solid material in the hitherto more conventional way. The basic design is a lightweight tube. Each camshaft controls a pair of intake and outlet valves, arranged in parallel.

The key feature of the new 470 is, as ever, its unique, flexible Common Rail system with fully electronic engine management system and X-PULSE pressure booster. While the pressure in the common rail only ever reaches 900 bar at most, the pressure in the individual injectors is boosted to an injection pressure of up to 2100 bar.

Depending on the specific operating condition, the injection rate can be freely shaped, with each injection process comprising up to five individual injections. X-PULSE does not only minimise fuel consumption, but at the same time also makes the engine exceptionally smooth running.

The basic design of the injectors is the same as in the 471, although the actual spray nozzle is differently shaped. It has the same seven injection orifices. The shape of the combustion chamber in the pistons of the 470 has been geometrically optimised, and matched to the other parameters of this engine.

As with the 471, charging takes place via a turbocharger with asymmetric turbine casing, fixed geometry and charge-air cooling. With this particular technology, the exhaust gas from the three rear cylinders is channelled directly into the turbine, without the losses involved in passing through the exhaust gas recirculation system. Only the front three cylinders are directly connected with the exhaust gas recirculation duct. This process improves the engine’s responsiveness. Charge pressure is limited by a wastegate valve. The new turbocharger has been configured specifically for use in the  470.

The performance and efficiency of the exhaust brake in the new  470 are comparable with those of the engine. Mercedes-Benz has opted to use a turbocharged decompression brake, controlled in three stages via a steering column switch. In the first stage, the exhaust brake is activated on three cylinders, with the remaining three further cylinders brought in as a second stage. The third stage involves increasing the charging level of the engine to deliver an impressive maximum brake power of 340 kW.

The stringent requirements of the Euro VI emissions standard have led to the development of an extremely complex emission control system. At its heart is Mercedes-Benz’s BlueTec technology, which uses SCR technology to clean the exhaust gases. This involves artificial urea, known as AdBlue, being added to the exhaust system. Harmful nitrogen oxides are thus converted into the harmless elements of nitrogen and water in a downstream SCR catalytic converter. BlueTec technology is able to optimise the combustion process and has been proven to deliver excellent fuel consumption figures.

Like the OM 471, the 470 also features a cooled exhaust gas recirculation system (EGR), specifically configured for this engine. The EGR cooler has been completely redesigned, eliminating the need in the 470 for a water manifold – another weight-saving measure. The particulate filter is also new. This too has been sized specifically for the OM 470, making it lighter in weight than in the 471.

A high level of economic efficiency is a key feature of the new  470. The low fuel consumption of the engine is particularly noticeable. This is achieved with the help of the auxiliary components, such as the closed-loop coolant pump and the air compressor, which has also been designed to help optimise fuel consumption.

Another key factor contributing to the engine’s overall economic efficiency is the extension of the service intervals to as much as 150,000 km in long-distance transport operations. The particulate filter is maintenance-free up to 450,000 km of operational use. Ease of maintenance also helps to reduce costs. A filter module incorporating the oil filter as well as the two fuel filters is fitted in an easily accessible position on the cool side of the engine. The filters have been specially designed for the new 470 and, compact and light in weight as they are, also play their part in the overall reduction in weight.

The engine designed for installation in buses and coaches has a particularly flat, space-saving oil sump. Due to space limitations, the auxiliary components are also arranged slightly differently here. Depending on where it is installed, the already very smooth-running engine is also fitted ex factory with a two-mass flywheel.

The engineers involved in developing and testing the new OM 470 were able to benefit from the extensive experience already made with the 471. Despite this, the new 470 was also very rigorously tested in the toughest of conditions, all over the world. Test trucks were thus not only put through their paces in urban and long-distance traffic in Europe, but also in North America and . Endurance testing of the new engine’s viability for use in buses and coaches was also conducted by EvoBus in .

The objective of both development and testing work was to ensure a high level of reliability. The new OM 470, like the larger 471, therefore managed to achieve an impressive B10 figure of 1.2 million kilometres. In other words: at least 90 percent of the engines are able to cover this distance without the need for a major overhaul. The outcome of all the development and testing is an excellent commercial vehicle engine. The optimised weight of the new 471 gives it a higher payload, making it the most efficient unit in the 11-litre class, anywhere in the world. The overall package is thus the ideal solution for customers, delivering maximum customer benefit.