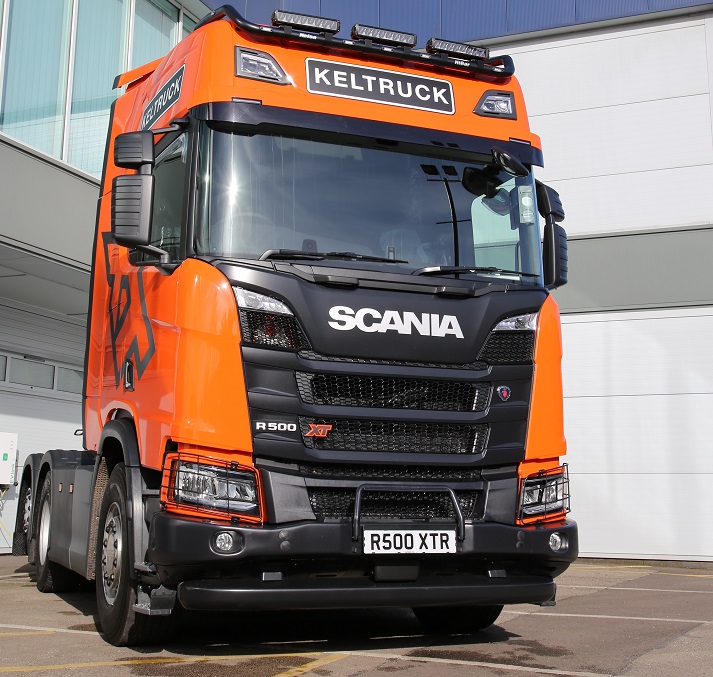 Visitors to Keltruck, Europe’s largest independent Scania dealer, over the next few months will have the opportunity to win themselves a limited edition Scania XT mug, just for talking a selfie.

Keltruck is auctioning off its high-spec Scania XT static demonstrator, in the hope of raising a significant sum of money for someone’s favourite charity and is currently taking the vehicle on a tour around its dealerships. As part of this, it is also running a social media competition, where anyone who takes a selfie in front of the vehicle while visiting a Keltruck dealership and then publishes it with the hashtags #KeltruckXT #ScaniaUK and will receive a limited edition Scania XT mug.

They will also automatically be entered into a competition to win an iPad, with the winner being drawn at random at Convoy in the Park at Donington Park on 21-22 July.

The XT R500 NA High Roof 6×2 tractor, which comes complete with a host of factory options and aftermarket Kelsa light bars, has just commenced a tour of 16 of Keltruck’s 18 UK sites (see venues and dates below). During the four-month tour, which includes a stop-off at the Tip-ex Show in Harrogate (31 May – 2 June), Keltruck will be inviting people to place sealed bids for the truck. By his own admission, Keltruck’s new and used sales director Dave Morgan said he got a “deal” on the truck from Scania GB. He said Keltruck just wants to recoup its costs, and “not make a penny on the deal”. With this in mind, the truck has the potential to raise a substantial sum for the buyer’s preferred charity.

The truck keys, and the charity cheque, will both be handed over at Convoy in the Park.