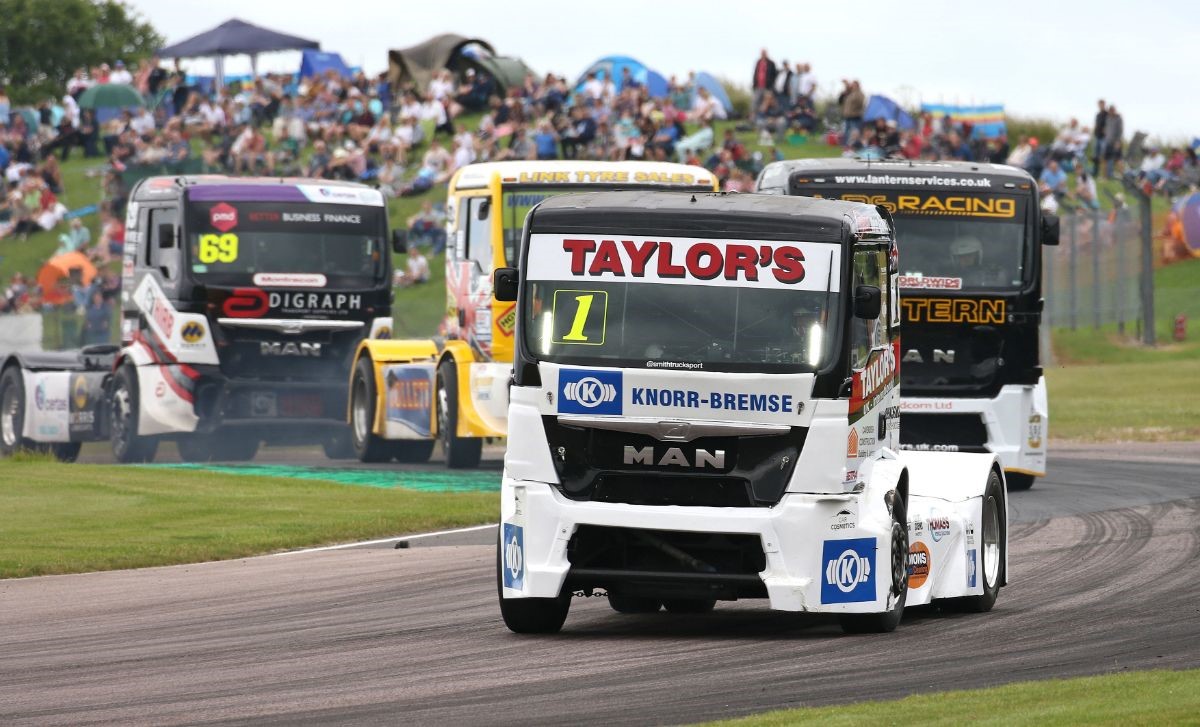 The MV Commercial BTRA Championship is set to speed into Donington Park this weekend (August 10/11) for one of the biggest events of the 2019 season – Convoy in the Park at Donington Park.

Marking the second half of what has proven to be another ultra-competitive campaign; Britain’s heavyweight behemoths from both Division 1 and Division 2 will descend on the Leicestershire venue for an action-packed two days of racing.

With events at Brands Hatch, Pembrey, Thruxton and the Nurburgring in the books already, the battle for supremacy is likely to only intensify under the flightpath of East Midlands airport as the series heads towards the business end of the season.

No less than eight races have been scheduled for the weekend at Donington Park, four for each class, and the challenging characteristics of the 1.95-mile circuit is set to lend itself to an unforgettable spectacle.

Division 1 sees a familiar name at the standings’ summit with three-time and reigning champion Ryan Smith leading the way at the halfway marker. Hungrier than ever it seems, Smith has been a tour-de-force from the get-go and has powered his way to victory in all but three races this year.

Boasting a healthy points advantage, Smith will undoubtedly have his sights set on extending his winning streak – laying down the gauntlet to anyone who dares stop him too. Despite highlighting Donington Park for its debut, Smith’s brand-new Navistar truck will not be in action, with the Mansfield-based racer continuing behind the wheel of his trusty MAN TGA. 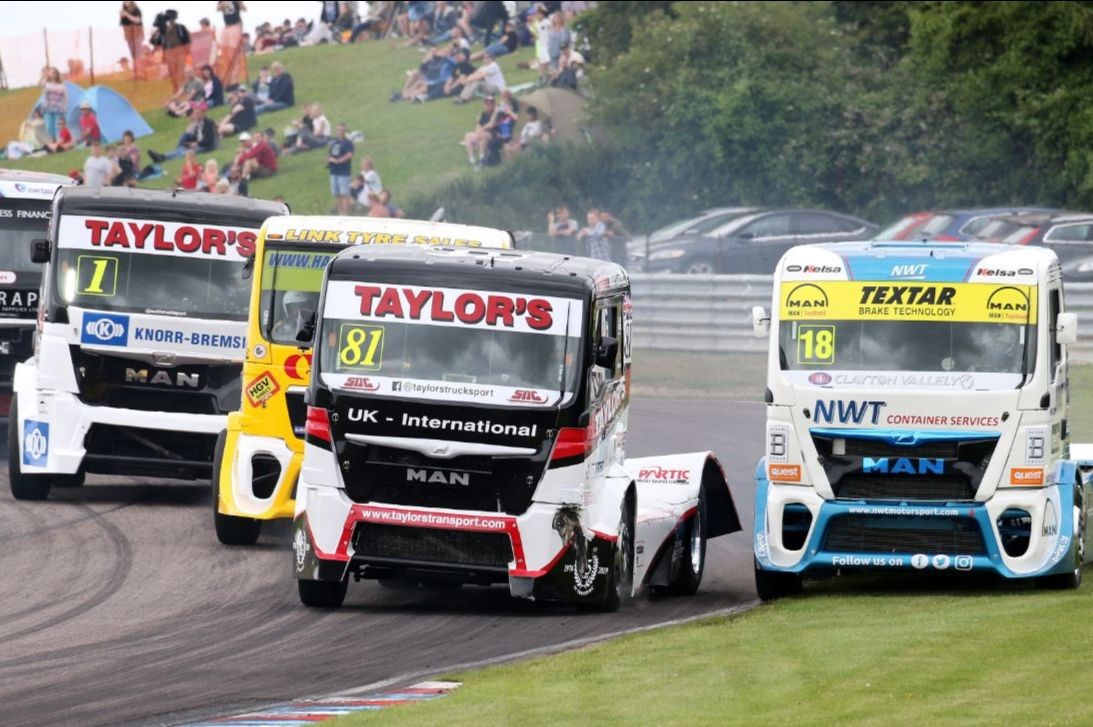 Leading the chase for Smith is former champion David Jenkins, who has two wins to his name so far. Underlining his credentials as one of the form drivers, Jenkins will be focused on closing the gap to the series leader as he targets adding a second crown to his 2011 triumph.

Championship regulars Mark Taylor, Simon Reid, John Newell, Richard Collett have been in the thick of the action this year and all four have scaled the podium at least once already. Tom O’Rourke meanwhile made his debut last time out and will be hoping for further success.

Each chasing that elusive first win of the season, a keen eye should be cast over all four competitors as the weekend plays out as they bid to convert their front-running pace into a visit to the top step of the rostrum.

Donington Park will see ten-time champion Stuart Oliver make a return to the championship too, making his first appearance since the Brands Hatch curtain-raiser; where he was victorious. The Volvo VNL driver is one of several drivers rejoining the fray for the weekend.

Oliver’s son Michael will be back in action in his Scania whilst 2018 championship protagonist Jamie Anderson will be behind the wheel of his MAN TGX for the first time since last year’s finale.

Shane Brereton and Terry Gibbon will make their first appearances of the season too, whilst Frans Smit is back amongst the British contingent after starring at the season-opener.

All to play for as Division 2 title battle heats up

With four events down, five different drivers have taken top honours in Division 2 so far however it is 2018 title winner Luke Garrett that remains the man to beat in the fiercely-competitive class. 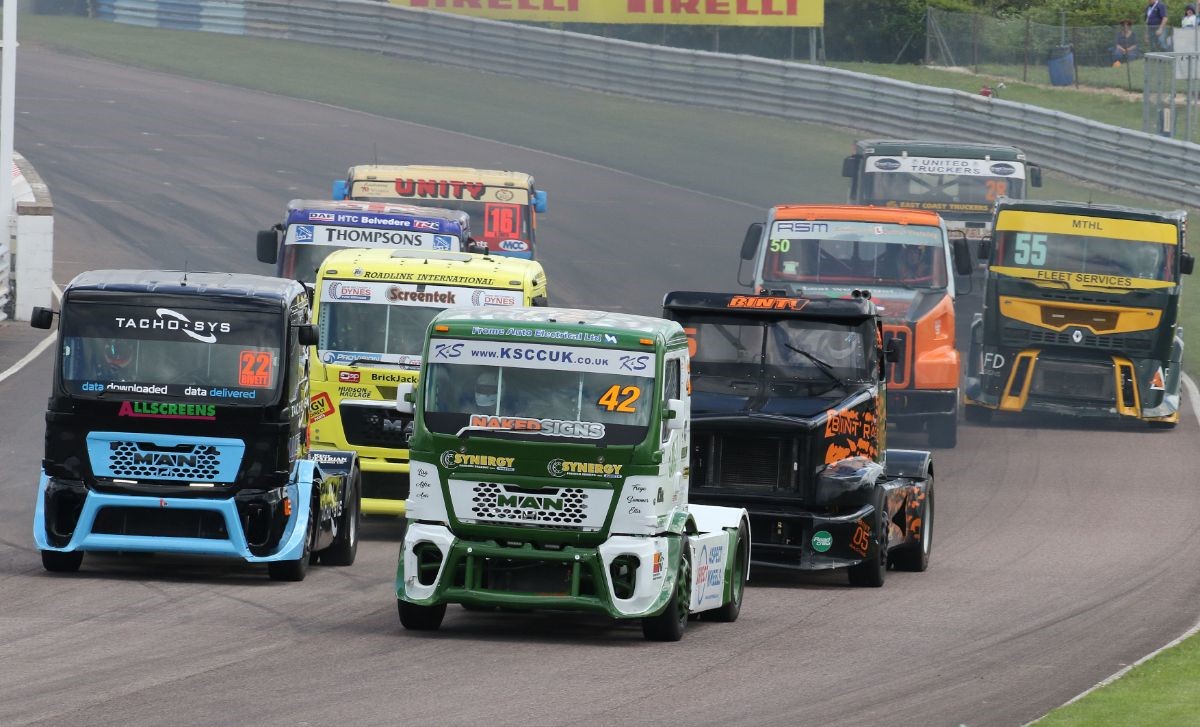 Donning the mantel of defending champion, the MAN TGX has been at the forefront of the action since the start of the season, winning countless races. Despite sitting in the pound seat in the points, Garrett has to keep an eye on those behind him as a long list of challengers grows.

Steve Powell has won a race at every event so far this season and his consistent showings have placed him firmly into the mix for overall contention. Pairing rapid speed with consistency, the MAN driver

Former Renault UK Clio Cup champion Paul Rivett has enjoyed a successful transition from cars to trucks, winning two races along the way too. Also in the hunt for the title at this stage, the WDE Motorsport racer will be one to watch around a circuit he has enjoyed success at in the past.

Both John Bowler and Erik Forsstrom have both been victorious too with Bowler enjoying a near-perfect weekend last time out at the Nurburgring.

Throw into the mix John Powell, Jim Bennett, and Simon Cole into the Division 2 melting point of contenders and picking a winner has never been more difficult, with any one of the aforementioned names all capable of prevailing.

Rounding out the list of entries for the weekend is Paul McCumisky, who will be hoping to hit the track for the first time this season in his Volvo FM12.

Renowned for throwing up all manner of thrills and spills, the MV Commercial BTRA Championship’s annual visit to Donington Park is set to be unmissable.

To find out more information about the event such as the full entry list, timetable, and links to live timing, head to https://www.barc.net/event/btrac-donington-park/.

Tickets for Convoy in the Park at Donington Park can be purchased via https://doningtonpark.msv.com/DP-19-Convoy