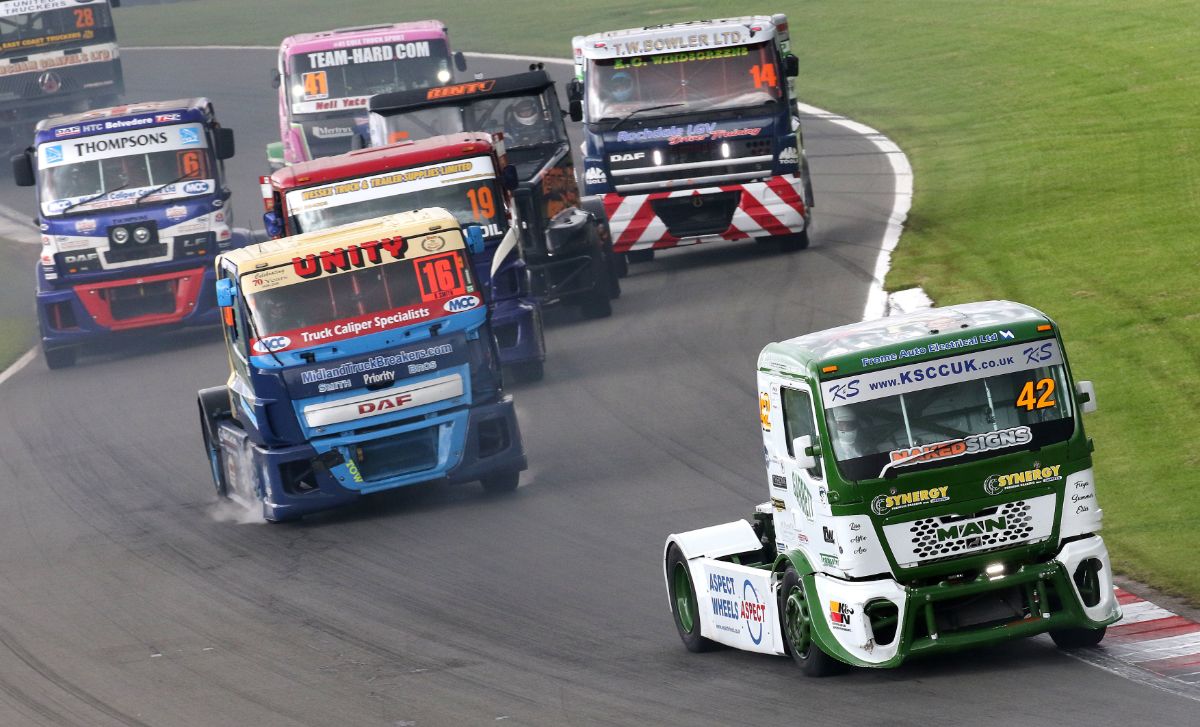 Spoils were shared in Division 2 of the MV Commercial BTRA Championship this past weekend (August 10/11) as Luke Garrett and Paul Rivett emerged as the leading lights at the Leicestershire venue, taking two wins apiece. 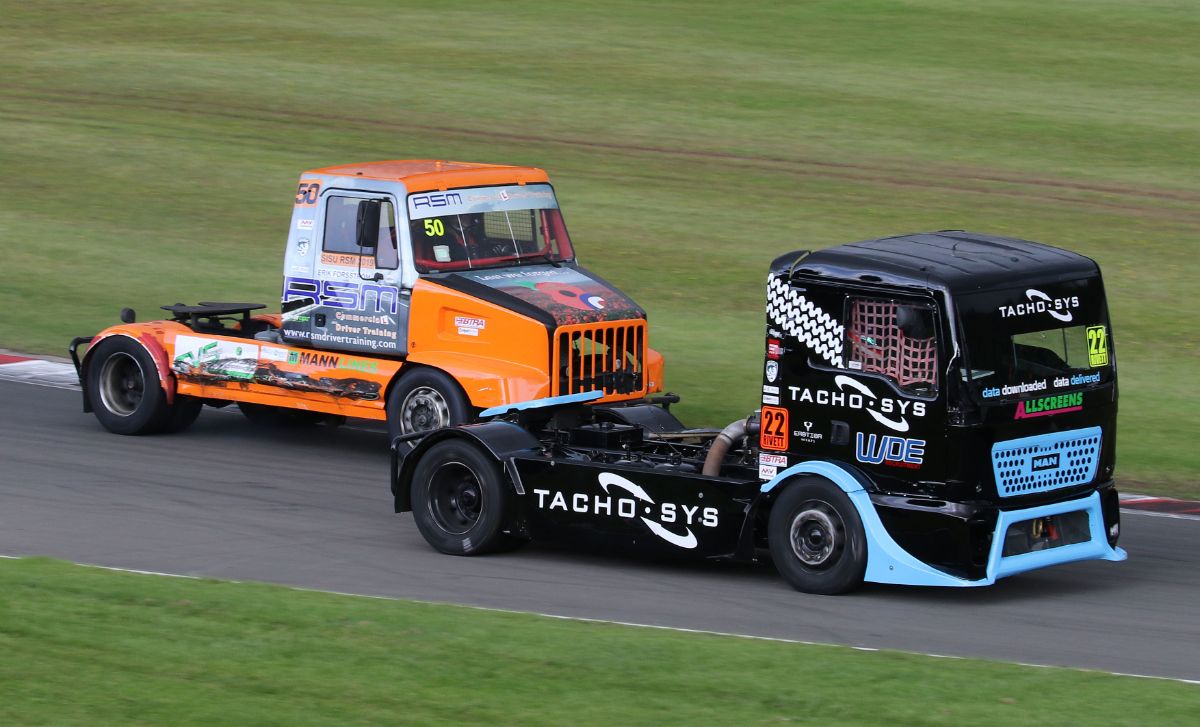 Kicking off the second half of the season under the flightpath of East Midlands airport, the championship took centre stage as part of the popular Convoy in the Park event – with the Division 2 contingent in action across four blockbuster races.

Qualifying around the 1.97-mile proved ultra-competitive as usual with reigning champion Garrett scoring yet another pole position. Despite losing time due to exceeding track limits at one stage, the MAN driver held his nerve to power to top spot ahead of Steven Powell.

Garrett and Powell proved to be in a league of their own in the opening encounter as they went wheel-to-wheel for overall honours. Building a sizeable gap over their nearest rivals, the championship protagonists were separated by no more than a second during the ten laps. 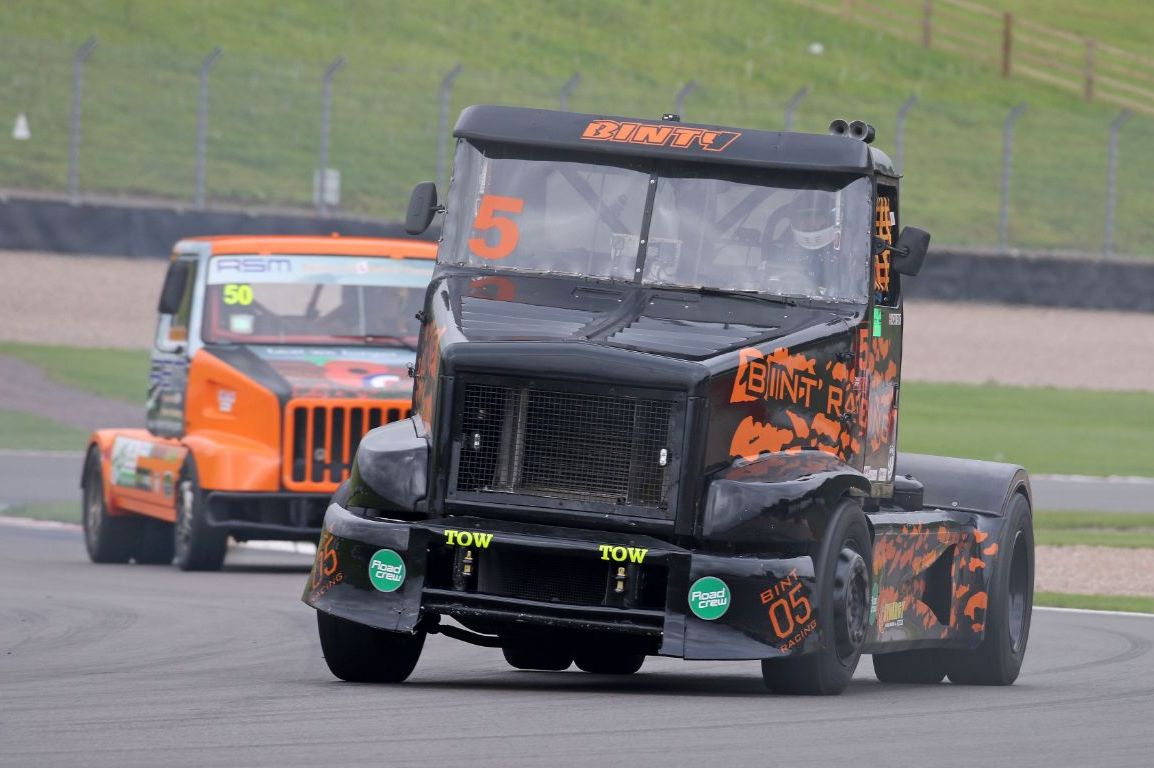 Providing a resolute defense to the oncoming advances of Powell, Garrett held off his MAN counterpart to sweep to victory whilst Adam Bint produced a stellar driver to round out the podium in his Volvo White Aerodyne, having started eighth.

Race two of the weekend saw former Renault UK Clio Cup champion Rivett utilise all of his experience around the challenging Donington Park layout to score his third win of the season.

Starting on pole position, the WDE Motorsport driver served up a dominant performance to take a commanding lights-to-flag victory, further strengthening his position in the standings.

Powell was once again the closest challenger to the race winner as he followed the leader home for the second consecutive time whilst one-time victor Erik Forsstrom edged out Brad Smith to finish third.

There were elements of deja vu in the third Division 2 race of the weekend as Rivett once again triumphed in his MAN. As he had done earlier, the tin-top convert exerted his front-running pace with another assured lights-to-flag performance, with Powell in second place some nine seconds down.

Winner at the Nurburgring last time out, John Bowler made a welcome return to the rostrum on British soil as he drove his DAF to third place.

The fourth and final race of the weekend for Division 2 saw the meeting come full circle as defending champion Garrett finished like he had started, collecting more silverware on the top step of the podium.

Having been in the thick of the action whilst Rivett reigned supreme in races two and three, Garrett bounced back to record his latest victory of the season.

Losing the lead to Rivett in the early stages, Garrett fought back and retook the lead position on lap five as Rivett dropped down the order and out of the race. From there, nothing could stop the points leader as he swept his way to victory with Powell made it four second-place finishes on the bounce at Donington Park.

As he had done in the previous contest, Bowler rounded out the podium with another third-place finish.

To view the full classification of results from all MV Commercial BTRA Championship Division 2 sessions from Donington Park, click here.

The 2019 MV Commercial BTRA Championship now heads to Snetterton on September 7/8 for the sixth event of the campaign.