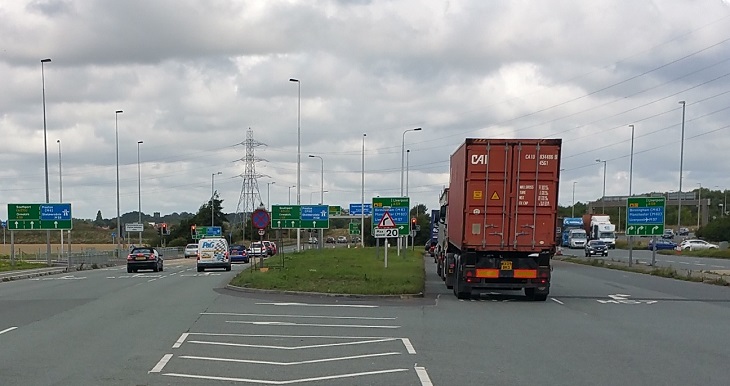 Intelligent road studs, which light up in response to changing traffic lights, are to be used for the first time at a motorway junction in a move that is intended to improve safety.

Highways England is installing about 170 LED road studs at Switch Island in Merseyside, where the M57, M58 and three A roads all join together and is used by more than 90,000 vehicles every day.

The intelligent road studs are being introduced as part of a £3 million project to improve journeys and safety.

The LED road studs light up when traffic lights turn green so drivers can clearly see which lane they should follow. Cables under the road surface connect them to traffic lights through a nearby automatic controller unit. The studs can be visible up to 1000 metres away – far greater than traditional reflective road studs.

Highways England has already installed the LED studs at Hindhead Tunnel in Surrey to guide drivers through the tunnel but the Switch Island scheme will be the first time they have been linked to traffic lights at a motorway junction.

Construction work on the Switch Island scheme, which is being funded by the government’s £220 million congestion relief programme, is due to start today [5 February] and is expected to take around a year to complete.

The scheme is designed to improve the flow of traffic and enhance safety, following 49 collisions at the junction in the past two years – an average of one every fortnight. New traffic lights will be installed at a height of more than 5 metres – higher than HGVs and double-decker buses – so that drivers approaching the junction can clearly see when the lights are changing.

Other improvements will include changes to the road layout and lane markings, new barriers between carriageways, coloured high friction surfaces and better signs. And a new 400 metre shared cycle path will be created through the junction, which will link up with the existing cycle path alongside the A5036 Dunnings Bridge Road.

The new intelligent road studs were designed by Oxfordshire-based company Clearview Intelligence. Managing director Nick Lanigan said: “The new studs have been proven to reduce lane transgression by over 50% in certain conditions so it’s a great way to help improve the safety for all road users.”