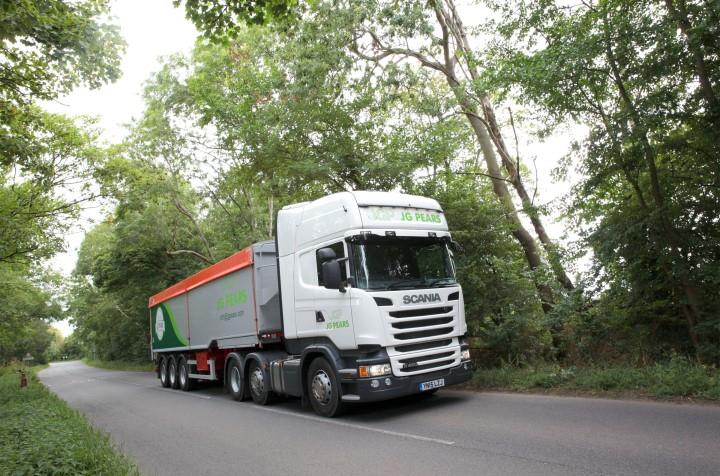 “Our fuel trials were conducted over a route we run twice a day between Newark, Sleaford and Newant in Gloucestershire,” comments J G Pears Group Logistics Manager Andrew Bostock. “We trialled each truck repeatedly over this relatively easy-terrain route with the same two drivers to eliminate any bias or road condition variations. In short, the Scania R 450 obliterated the competition by returning 10.2 mpg.

Each truck in the new fleet will be equipped with Scania’s 450 horsepower Euro 6 engine. Requiring Selective Catalytic Reduction (SCR) only to meet the emissions standard, these power units form part of Scania’s highly fuel-efficient third generation of Euro 6 engine range.

Plated at 44-tonnes gross train weight, the trucks in this order are all 6×2/4 twinsteer tractor units with the exception of a single skiploader drawbar rigid. The tractors will each cover up to 300,000km per annum hauling J G Pears’ fleet of bulk tipping trailers on the firm’s 24/7 nationwide transport operation.

In addition to its animal by-product rendering activities, J G Pears is involved in the manufacture of tallow and animal feeds. The company is also active in the renewable energy arena and is currently developing a multi-million pound combined heat and power plant at its Low Marnham, Newark facility. The energy produced here will fuel the company’s on-site rendering operations, with excess power being fed into the national grid.