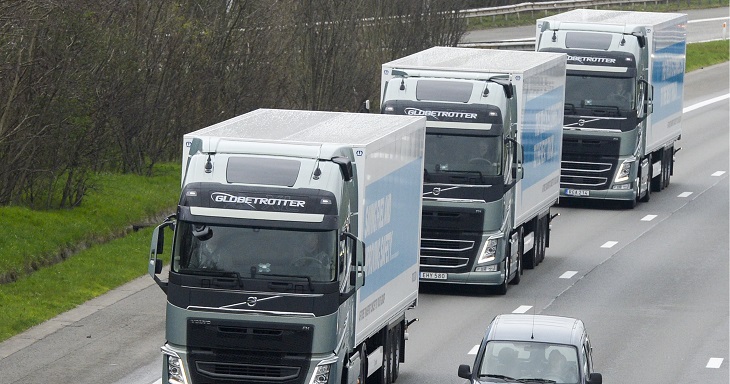 Trials of ‘platooning’ – where up to three HGVs travel in convoy, with acceleration and braking controlled by the lead vehicle – will begin in the UK by the end of 2018, the government has announced.

But concerns have been raised about the safety of such systems. While the lead vehicle has control over speed and braking, all lorries in the platoon will always have a driver ready to take control at any time.

The £8.1 million trial will be carried out in three phases, with the first focusing on the potential for platooning on the UK’s major roads. Initial test track-based research will help decide details such as distance between vehicles and on which roads the tests could take place.

Trials are expected on major roads by the end of 2018. Each phase of the testing will only begin when there is robust evidence that it can be done safely.

Similar trials have already been carried out in Europe and the United States.

The Transport Research Laboratory will carry out the trial, with funding provided by the Department for Transport and Highways England.

The government said that, if successful, platooning could have major benefits for motorists and businesses in the UK. For instance, a row of lorries driving closer together could see the front truck pushing the air out of the way, making the vehicles in the convoy more efficient, lowering emissions and improving air quality.

Transport Minister Paul Maynard said: “We are investing in technology that will improve people’s lives.

“Advances such as lorry platooning could benefit businesses through cheaper fuel bills and other road users thanks to lower emissions and less congestion.”

“But first we must make sure the technology is safe and works well on our roads, and that’s why we are investing in these trials.”

The Freight Transport Association (FTA) welcomed the government’s plans. “Platooning could be an innovative means of reducing fuel use so saving costs and reducing carbon and air quality emissions. Driving closely together, platoons of trucks take up less space on the road, and travelling at constant speeds can help improve traffic flows and reduce tailbacks,” said Christopher Snelling, the FTA’s head of national policy.

“However, the system has to be shown to be safe on the roads and to deliver the promised benefits. The sooner the trial takes place, the sooner the UK logistics industry, which represents 11% of the UK’s non-financial business economy, can know if this will be the right route for the future.

“Technology is the solution to emissions, road safety and managing costs. Platooning could be a real opportunity to optimise logistics on the road – we need to know if it is the way forward as soon as possible.”

Meanwhile, the Road Haulage Association’s chief executive Richard Burnett wants more focus on safety in the trial: “Of course we welcome improvements to the way the road freight industry works and we understand the benefits that such a mode of operation would bring,” he said.

“However, currently the focus seems to be on the technology behind the system. Safety has to come first and it cannot be compromised. It is crucial that this element of the concept gets the highest priority.”