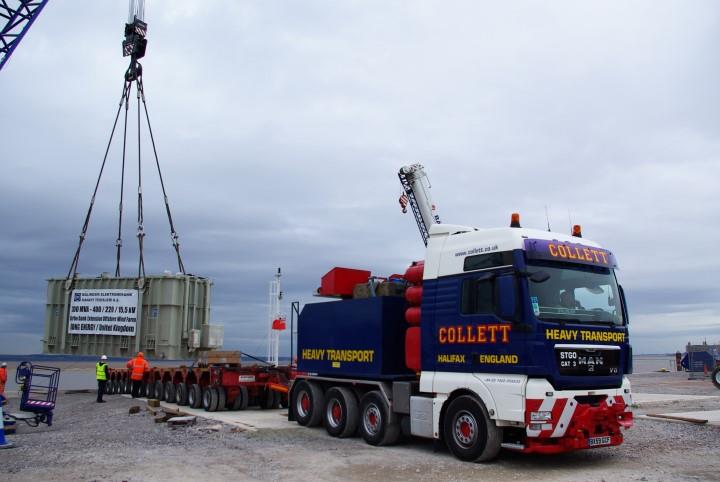 Biglorryblog’s heavy moving mates at Colletts have been in touch with some cracking pictures of a recent move and some background information.

Collett’s Girder Bridge Trailer is called into action once again, this time to facilitate the delivery of two 200Te transformers destined for the onshore substation at Burbo Bank. With construction underway on Burbo Bank Extension, DONG Energy required the delivery and installation of two 200Te transformers at their onshore substation. Once constructed, the substation will allow the 32 turbine offshore wind farm to connect to the national grid and begin generating power for over 180,000 homes. Handling delivery of the transformers into the UK, SDV UK Ltd called upon the expertise of Collett to facilitate the ship’s discharge at the Port of Mostyn and the following transport to site of the two cumbersome cargoes. With the ship arriving in July the team were onsite to undertake the project with two ballast tractors and a 14 axle modular hydraulic flat top trailer. The Collett Heavy Lift Team, operating began the task of unloading the components from the hull of the ship utilising a 1,200 Te crane. Each load was lifted from the ship and delivered to the awaiting 14 axle trailer. The loads were then transported to an agreed holding position at the port where they were stored on stools until a suitable construction stage at the substation allowed for delivery. The delivery of the two loads took place in September, but due to the size and weight of the transformers this was no-where near an everyday undertaking. Each transformer measured 11,400mm (L) x4,400mm (W) x 4,750mm (H) and weighed 200Te, therefore a more specialist method of delivery had to be devised to facilitate the loads owing to height and structure restrictions en-route. In order to utilize the abnormal load exit at the Port of Mostyn, the loads were required to travel over a level crossing. Usually this wouldn’t be an issue, however due to the weight of the loads and the size of the rail track Collett were required to obtain official track possession. This allowed the two transformers to travel over the level crossing on modular trailers. The loads would then be positioned in a local layby, approximately one mile from the Port, for transhipment from the 12 axle flat top to the 550Te capacity Girder Bridge for onward transportation. Not a simple task of lifting from one to the other, the loads once again had to be positioned on stools whilst the Collett Team took to building the modular Girder Bridge around the load.

Once constructed, the overall dimensions of the combination and load required specialist route planning from the Collett Consulting Team, providing traffic management plans and route analysis ahead of the project to ensure a safe delivery. This required the team to pore over mapping data for several days, intricately planning the route to prove suitability, undertaking swept path analysis and conventional surveying techniques to plan the project to perfection. The final route plan highlighted a weak bridge, too fragile to accommodate the Girder Bridge and load, consequently the team obtained temporary traffic restriction order, which required a 12 week approval process. This then allowed Collett to contraflow the A55 dual carriageway in the wrong direction, therefore avoiding the bridge and allowing the combination to re-enter the A55 in the correct direction.

Travelling under police escort Collett’s 10 man team departed from the Mostyn layby one late evening in September. Travelling throughout the night the Girder Bridge and its load passed along the rural roads of Flint before joining the A55 for the 15 mile journey to site in St Asaph arriving just as the sun began to rise.

Once on site the team unloaded the transformer and utilizing our jacking & hydraulic skidding system manoeuvred it into position onto a plinth and aligned onto anti vibration pads. Fast forward five days and following the exact same procedure, the second transformer was collected from the layby and delivered to site.

The collaboration between Collett’s Consulting, Projects and Heavy Lift Divisions provided invaluable in planning and undertaking the delivery of these two cargoes. Liaising with Network Rail, North Wales Police and the councils of both Flint and Denbighshire ensured a faultless delivery from port to site and positive feedback from all involved.