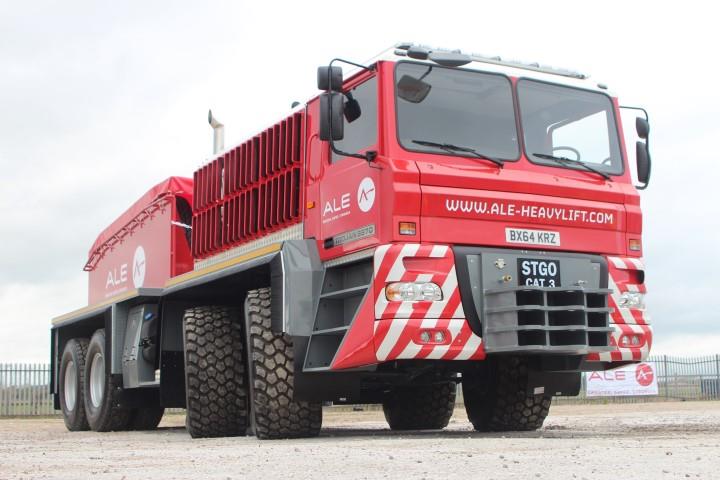 Look closely – it’s not what you think! To those used to seeing Electrical Transformers and Heavy Electrical Equipment being transported from the Alstom Factory in Stafford, UK, to Ellesmere Port for export, the load out on the 25 th September 2014 appeared to be yet another completed order for an unknown overseas customer.

A L E the Worldwide Heavy Transport & Lifting Specialists based at Hixon, Saffordshire provided the transport in the form of a 2×14 axle bogie girder frame trailer and the requisite motive power in the form of a leading tractor and two tractors pushing at the rear. To the casual observer nothing unusual at all – a scene repeated on a frequent basis, however, a closer look at the leading tractor revealed a brand new ’64 plate Ballast Tractor Unit – the TROJAN 8870! The shape of things to come. In 2012, A L E realised the need for replacement Ballast Tractors that would take the Company well into the 21 st Century, meet the increasing demands involved in moving heavier loads (and having found that the Commercial Truck Industry could not meet the specific requirements needed for a future vehicle i.e. footprint, tractive effort, fuel economy, brake retardation, cooling system, driving position, visibilty, ease of maintenance and drive train strength), embarked on a design project to build their own Tractor. Having first hand experience from the operation of what is probably A L E ‘s current lead tractor based in the UK – the Unipower MH8875 (originally built as a demonstrator Tank Transporter destined for the British Army – which proved itself in trials but lost out when politics intervened and the contract was awarded to Oshkosh) the Company realised it needed a modern variant of the Unipower MH 8875.

However Unipower no longer existed having followed its predecessor Scammell (arguably the best Heavy Truck builder in the World) into the history books. Fortunately a number of 8×8 Military Units were built for the French Army and 12 were available having come to the end of their military use. A L E purchased six of the vehicles and shipped them to Hixon. As purchased, the vehicles were in poor condition, in particular the engines and gear boxes were of little use to a modern heavy hauler.

A L E ‘s design staff and engineers rose to the challenge and in what is undoubtedly a remarkable feat of design and engineering embarked on a programme to design, build and place into their fleet six new custom designed and built TROJAN 8870’s! Working closely with the DfT and VOSA (now known as the DVSA since April 2014) who were co­operative and helpful throughout, the design staff have met the many technical and legal requirements in the production of a new vehicle, one example being exhaust emissions. The truck has gained overall type approval. An important consideration was to ensure that power could be delivered effectively providing improved tractive effort together with a significant and balanced footprint. TROJAN 8870 Press Launch. On 23 rd October 2014 at the Fanastict Centre, Hixon Airfield, A L E proudly displayed to the Industry Press two TROJAN 8870 ballast tractors which are without doubt “The” next generation tractors in the heavylift industry! Produced in the UK, the most significant feature of the Trojan is its unique ability to link with multiple tractor units in a command and drone convoy. Linked mechanically by drawbars and/or “A” frames as required, by air and by the Electronic Controller Area Network Bus System which significantly reduces the amount of vehicle electrical wiring, relays and switches. The vehicle’s Electronic Control Units are constantly monitored and the command vehicle controls all vehicles in the convoy with no limit to the number of vehicles in convoy. Steering, electrics, engine and transmission output are synchronised by computer on all units thus providing matched gear, rpm and torque. Similarly vehicle braking, engine compression braking and transmission retardation is controlled identically. Driver comfort has not been overlooked, the truck cab being a Penman military cab walk through with two seats. Air conditioning and auxiliary night heater is standard. The driver controls include a multi­function, multi­colour electronic display to A.L.E specification and steering is provided by an integral power box with direct drag links and hydraulic rams with emergency back­up. The view from the flat fronted cab is excellent being free from any obstruction, driver controls are well positioned and “in cab” noise is extremely low due to sound proofing thus providing additional driver comfort. The electrics are 24volt, fuel capacity is 1,400 litres. The vehicle is equipped with a single hydraulic horizontal drum winch with 8,000kg capacity. An issue addressed by A L E’s engineers is the maximum geared road speed which is 48mph/77kph providing faster travel times when running solo. A fuel saving of 40% has been achieved compared to the existing Fuan/Unipower fleet. The TROJAN 8870 can handle a gross combination weight of 330t at a maximum gradient of 14%. However, on its very first heavy load movement undertaken on 18th September 2014 comprising a Transformer load from Alstom, Stafford to Ellesmere Port , TROJAN 8870 registered number BX64 KJY pulled a gross combined weight of 400t without rear tractor assistance. The Future The two TROJAN trucks BX64 KJY and BX64 KRZ are the first of a fleet of six new vehicles to be built “in house” by A L E ; Four are to be operated within the UK and the remaining two will work in the United Arab Emirates. The design and build of the TROJAN truck demonstrates, yet again, the expertise which A L E provide worldwide to the heavy transport and lifting market and must surely place them in a unique position to meet the requirements of customers long into the 21 st century. Gary Butler, A.L.E. Project Manager and designer of the Trojan Truck commented, ”We wanted to replace our current fleet of trucks with a specification that improved on vehicle performance, capability, and fuel efficiency but there was no other truck on the market that delivered this. We therefore designed our own based on our specific requirements, which included computer synchronisation, future­proof electronics, automatic gear change, ABS, transmission retardation, a good footprint for power and torque, and a stainless steel cab. Through the custom drive and transmissions, we are now able to deliver the required power to move abnormal loads more effectively, more smoothly and in a more environmentally friendly way. It was very much a team effort and without the hard work from everyone involved the truck could not have been created” When asked if the Company would consider such a project ever again ?– the reply was an emphatic “Yes”!

Conclusion One can expect that the design and overall production of these vehicles by A L E will stir the Heavy Haulage Industry worldwide, and that the operation and future success of the truck will be closely monitored – it is hard to imagine that the truck will not go on to win “Truck of the Year” at the 2015 HTA awards ceremony – and at this moment in time go on to be a world beater!

Update: “Have been advised by ALE that the original BT120 units purchased were in fact in “like new condition” but that the ISM engine, transmission, rear axles etc. were never big enough for the heavy haulage application. The prototype Unipower MHT tank transporter did suffer water ingestion into the engine and was re-built and modified in 1999/2000 by the ALE team under the auspices of Gary Butler. The ZF transmission originally fitted had been a one-off prototype and was removed and now has pride of place in their training school. A number of 8×8 Military Units were built for the French Army and 12 were available having come to the end of their military use. ALE purchased six of the vehicles and shipped them to Hixon. After consideration of upgrading it was decided to dispose of the units, selling off some components whilst utilising the cabs, front axles, and winches for the Trojan project.”