News from Turin today with a press release from those kinds chaps at Iveco who have helped to bring a special Christmas to more than 2,000 children in a small and remote town in Northern Brazil. Here’s the story and there’s a link to a Youtube video as well.

Christmas for the children of Palestina do Pará, a small and remote town in the state of Pará, northern Brazil, used to be a festivity they saw celebrated on television, but this year was different.

Everything changed with the arrival of the trucks from IVECO Solidarity Load, which travelled 5,521km loaded with toys. The people of Palestina do Pará will remember the month of December 2018 for the demonstration of solidarity that crossed the country and engaged with those working throughout the transport and logistics chain in Brazil. 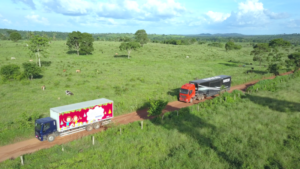 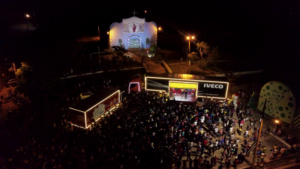 For two months, IVECO and its partners collected donations, inspiring the engagement of many people to generate a chain of goodwill that crossed the country. IVECO’S dealers, suppliers, customers, partners and its factory in Sete Lagoas, in Minas Gerais, all collaborated in the campaign – supported by truck drivers – collecting a total of 3,685 toys which were distributed to 2,280 children.

“The IVECO Solidarity Load is a project that we are very proud of. Palestina do Pará is a small town that is difficult to access by truck and has a low Human Development Index (HDI),” explains Ricardo Barion, IVECO’s Marketing and Sales Director for Latin America. “The delivery of toys was a successful project that started in October. It was the best way to give back and share the results achieved in 2018 and inspire good examples,” Barion adds.

On the road with one destination

IVECO trucks travelled across Brazil to make Christmas brighter for many children. The challenge of taking the cargo to its final destination was shared among many drivers, who drove in the most diverse conditions to deliver thousands of toys to Palestina do Pará, located 648 km from the state capital Belém.

“The people of Palestina are humble and very respectful to each other. It is a quiet place,” said resident Jovani de Brito. Maria Sônia, also local to Palestina do Pará, pointed out that the “children here only know about the great Christmas parties and celebrations through television.”

“We have crossed Brazil, facing difficulties on the road, such as intense sun, high temperatures, heavy rain, dirt roads, narrow bridges and ferries, but we didn’t give up because we were carrying a very special load,”, said Maurício Corrêa, IVECO marketing manager. “With the support of the local city hall, we were able to surprise the local people. In addition to receiving toys, many children met Santa for the first time. We saw smiles on every face in the city. It was a unique and happy Christmas.”

In the city of Laranjal Paulista, in the state of São Paulo, for example, thousands of toys were donated by a customer. The action also included the participation of FPT Industrial, another CNH Industrial brand. The IVECO dealer network also helped with the collection. Efforts to collect toys were concentrated in the city of Jundiaí, also in São Paulo.

IVECO has published a video about the action that is becoming very popular in social media: https://youtu.be/U5sRFYc6NDs.

“The IVECO Solidarity Load 2018 has overcome obstacles and travelled a long way to give a smile to the people in Palestina do Pará, and this makes it worth all the effort,” concludes Corrêa.